On Wednesday, during the reconvened session, Governor Ralph Northam’s proposed changes to a marijuana legalization bill were accepted by the General Assembly. This allows limited ... Read more

1 day ago by Matt Fariss.

OPINION — Virginia has transformed quickly to a progressive state

Even the most ardent opponents of Virginia Gov. Ralph Northam’s administration must have some amount of respect for the magnitude of change that has been ... Read more

1 day ago by Roger Watson.

The 2021 General Assembly reconvened session that occurred last week was almost exactly what I expected it to be – a confirmation of the 2021 ... Read more

2 days ago by Tommy Wright.

The reconvened session was held last week with few surprises. Most Republican proposed legislation had already been killed.  For this reason, we mostly considered technical ... Read more

2 days ago by Frank Ruff.

Have you recently had a medical appointment? Conducted business online? Needed your electricity restored after storm damage? If so, you may have benefited from the ... Read more

6 days ago by Quentin Johnson.

COLUMN — A thank you letter

When I moved to Farmville in April 2016, it was an unsettling time in my life. Yes, I had the blessing of a full-time job ... Read more

1 week ago by Titus Mohler. 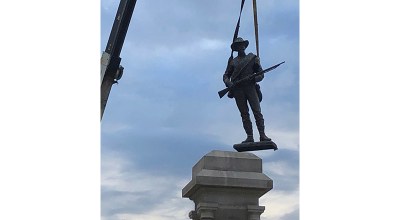 COLUMN — Ruling seems to give town control of statue

A recent Virginia Supreme Court ruling could free up the Town of Farmville to finally determine the fate of the town’s Confederate statue. The ruling ... Read more

1 week ago by Roger Watson.

The 500-member-strong Agee-Miller-Mayo-Dungy Family Association are descended members of the historically Black Pine Grove community. We are the owners and custodians of the historic Pine ... Read more

2 weeks ago by Guest Columnist.

COLUMN — Detective Entrekin goes above and beyond for veteran

Standing in the Amelia Veteran’s Cemetery Thursday, Farmville Police Detective Sammy Entrekin seemed a bit surprised he was getting so much attention for just doing ... Read more

2 weeks ago by Roger Watson.

The cause of environmental justice has been hijacked

By Jerry Cifor President of Green Ridge Recycling and Disposal For decades, low-income communities and communities of color have been targeted locations for so-called “undesirable” ... Read more

2 weeks ago by Guest Columnist.

I  can remember how everyone’s hopes were raised in Charlotte County when Microsoft teamed with MBC and promised to bring free wireless to all school ... Read more

3 weeks ago by Guest Columnist.

COLUMN — Many more homes to come from Habitat for Humanity

On December 20, 1990, a dedicated group of local volunteers celebrated the official creation of the Farmville Area Habitat for Humanity. Now in our 30th ... Read more

3 weeks ago by Guest Columnist.

Fifth District Congressman Bob Good was one of only 12 members of the House (all Republicans) who voted against a resolution Wednesday, March 17, to ... Read more

3 weeks ago by Staff Report.

The 2021 General Assembly session concluded its work on March 1, and as promised last week, I wanted to continue to tell you about some ... Read more

4 weeks ago by Tommy Wright.

A Thanks to SEC popular adage advises, “Never put off until tomorrow what you can do today.” Mangled comic versions go something like this: “Never ... Read more

4 weeks ago by Quentin Johnson.

Making your own luck

Wednesday, March 17, is St. Patrick’s Day. This time of year always makes me think of a strange hobby of mine and the lesson it ... Read more

4 weeks ago by Alexa Massey.

It’s hard to believe anything positive can come out of a pandemic that has left more than 500,000 dead and disrupted the lives of everyone ... Read more

4 weeks ago by Roger Watson.

COLUMN — Needs of the homeless continue through the pandemic

The STEPS family, with the gracious support of community partners and sponsors, traditionally holds a February “Soup and Sandwich” fundraiser in Farmville to help support ... Read more

1 month ago by Guest Columnist.

The problem of Prince Edward County’s lack of access to high-speed internet may have a solution on display just west of here in Wise County. ... Read more

1 month ago by Roger Watson.

Bill will put kids back in schools

The 2021 General Assembly session concluded its work on March 1, and I wanted to update you on how the final week, and overall session, ... Read more

1 month ago by Tommy Wright.

If you are an older adult in the Piedmont Health District, you may be a little confused about how the registration process for getting a ... Read more

1 month ago by Alexa Massey.

2 months ago by Quentin Johnson.

Thank you to the front-line workers restoring power

First and foremost, this week I want to once again talk about the devastating storm that hit my district last week. As soon as the ... Read more

2 months ago by Tommy Wright.

Why are you not good enough for the good stuff?

A few years ago, my grandparents moved to Farmville. While packing up their belongings at their old house, my grandma gifted me her beautiful and ... Read more

2 months ago by Alexa Massey.

We have completed another week of the 2021 General Assembly session, and I wanted to take a moment to update you on last week’s proceedings. ... Read more

2 months ago by Tommy Wright.

Three issues have been causing turmoil for a year: unemployment, schools and vaccines. Gov. Ralph Northam closed down the state with power not seen since ... Read more

2 months ago by Frank Ruff.

COLUMN — Democrat priorities have changed over the years

When I was growing up, I knew my father was a Democrat. In the ’50s and ’60s, if one wanted a voice in Virginia’s government, ... Read more

2 months ago by Frank Ruff.