If you’ve ever enjoyed the beauty of the plaza in downtown Farmville or felt your heart give a little extra beat of pride when passing the “Welcome to Farmville” sign at Centra Southside Community Hospital, you can probably thank Jay Wilkerson.

As the Town of Farmville’s horticulturist, Wilkerson is the one who keeps the town’s flowers in bloom and creates visually exciting presentations in its planters, around its signs and in all sorts of places you might not even have noticed. 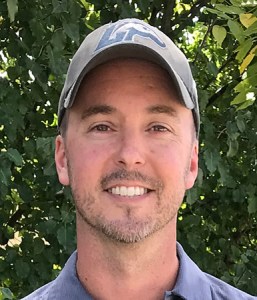 “I’m responsible for anything like that in town,” Wilkerson said. “That’s trees, shrubs, annuals, perennials, anything on town property, anything that’s not grass. I try to make sure there’s color in town year-round.” The term he likes to use to describe this is “green infrastructure.”

He took an hour around a weekday noon to give a little tour of a few places his work is most visible. Affable, calm and measured in his words, he seemed like the exact sort of person you’d want looking after anything that requires steady, patient tending.

“I think at last count I had 38 different areas that had plants that had to be maintained,” Wilkerson said. “I’m the entire Horticulture Department. The most visible parts of my job are the planters and the annual beds, and I think I’ve got about 32 planters in town. It’s 20, maybe 22 that need to be replanted and changed annually.” He takes it seriously: if you climbed into his truck to get a look at these sites around town, you saw a tiny, errant flower bulb on the passenger side floor.

Wilkerson often spoke with deference towards his predecessor, David Fowlkes, whom he took over from in 2017. “A lot of the credit for things goes to him. He’s the one that really accelerated the horticulture program in Farmville. He retired, which is why I got the job.”

One of the things you might not know, that Wilkerson points out, is that some plants are propagation protected, which is the plant version of being copyright protected. This is supervised by inspectors who come around to greenhouses and other places where plants are sold and make sure all the proprietary greenery that falls under this rule is tagged to show it’s legitimate and paid for.

“It would be easy for me to take 100 cuttings off this plant and have 100 of this plant next year,” he said, touching a coleus plant. It’s also specifically like burning a copyrighted CD: if you buy a propagation-protected plant as a home gardener and give a single cutting to a friend, you’re probably not going to get into a lot of trouble. But if you sell 100 illegal burned CDs, or 100 unregistered plants… well, that’s something else again.

Meeting at the Farmers Market, Wilkerson immediately climbed the steps next to the market building and pointed out something that’s free and open to everyone: the community herb garden, which was started with grant money. He inherited its care and has been keeping it up ever since.

“People are welcome to come up here and they can harvest whatever they want,” Wilkerson said. “This is a fully interactive garden, and I encourage people to come through, and smell it, and that kind of thing.”

He stepped carefully around the plants, pointing and listing them off. “Rosemary sage, basil, there’s a few different types of mint…things are a little bit past their peak, but they’re still good.”

Wilkerson continued, “Chives, we’ve got oregano there, columnar and pesto basil…” He held up a delicate, green sprig. “This would be really good in chicken, this is lemon thyme, there’s regular thyme back there.” Fragrant, it did indeed smell of citrus, clean and bright.

He plucked something from another plant. “This is a favorite, especially with the kids,” he said. “This is chocolate mint. If you’re making peppermint patties or anything like that, mint chocolate chip ice cream…” And, improbably, it smelled exactly like that, redolent of candy, yet gently herbal.

What if the garden gets stripped after everyone is reminded of it? “That’s what it’s here for!” he laughed, then kept indicating their herbs. “We’ve got lavender…this is garlic chives,” Wilkerson said of plants with stalks like green onions and dandelion-ish puffs on top.

“This is great, some people call it ‘society garlic’ because it has the garlic flavor but it doesn’t tend to linger on your breath like regular garlic.” He looked around at the garden. “This was something I definitely wanted to see continued and maintained.”

That’s just for starters. Wilkerson said, “As far as the design goes, you’re looking for multiple points of contrast. That can be in height, growth habit, contrasting colors, textures…”

They don’t look lush and inviting by accident; they’re planted and kept according to a visual design principle that Wilkerson explained thusly: “You need a thriller, a filler and a spiller.”

A thriller is a tall plant that offers the most visual drama. A filler is a less-dramatic but pretty and serviceable plant that fluffs out the main and middle part of the planter, giving the design body. The spiller is something that trails or drapes over the sides towards the ground, adding an extra bit of eye-catching beauty.

The whole aesthetic pleases the viewer who looks at it purposefully and creates a lovely background for those just passing by.

“This is definitely a focal point of town as far as my work is concerned,” Wilkerson said. He gestured to slender trees near some of the planters, which he said are lacebark elms. “These get decorated for the holiday season. These are some of the bigger planters in town. They get changed out twice a year. We get a lot of comments from visitors about them. I try to do something different in every planter and not to repeat from year to year. It can be a little bit of a challenge to do something new.”

For the non-gardener, keeping up with the plant names listed as you go around town looking is sometimes difficult, but the names alone are appealing: coleus (there are several varieties in his work), lantana, helichrysum, mandevilla, vinca, banana plant, impatiens, sunpatiens, cordyline, cosmos, red spider lily, crepe myrtle, ivy, black gum, coxcomb, paperbush, salvia, Japanese maple, diamond frost and sweet potato vine. All of these appear, some in multiple types, as Wilkerson’s handiwork.

Showing them each off, Wilkerson had a sure and careful touch, very much at home in his element. The ivy and sweet potato vine can be found, along with many of the above, next to the police station in a cool, half-shaded spot complete with benches.

It’s a secluded little place; people walked through, but their passage was muffled and they seemed to unconsciously slow down a bit. It’s a good place to stop and steady your nerves, breathe in the cool, verdant air and pause for a moment before getting back to the business of your day. Partly this is due to its location; but a lot of it is the result of Wilkerson’s patience and care.

This care is a result of working for 11 years at Farmville’s B&M Greenhouse, a job he took after graduating from Longwood with a degree in environmental biology.

“My dad’s a gardener; I worked in the garden with him, but I think my affinity for plants really started at B&M,” Wilkerson said. “I kind of got a full spectrum of skills there.”

That same care, however, can’t prevent outside forces from having an effect. Next to the “Love” sign, at the very opening of the trail, there’s boxwoods with yellowed leaves and hollowed-out spaces near the bottoms where vegetation should be. That’s indicative of dogs that, walking with their owners to and from the trail, stopped to relieve themselves. The cumulative effect was to deaden that part of the bushes. Wilkerson was pretty good-natured about it, though.

“My preference would be that they take their dogs a little further down the trail,” he said with a rueful smile. “Hopefully, there are so many beautiful things to see that folks won’t even notice it. I’d rather they enjoy the trail.”

This also dovetails into what can make the job challenging, as much as he enjoys it.

“It’s a lot to manage. I’m really fortunate in that I truly love what I do and I really love where I work, so that’s a benefit,” Wilkerson said. “The hardest part is probably working in the public domain where you don’t have complete control over your environment. If you’re landscaping your house, you can safely assume somebody’s not going to stomp through your landscaping in the middle of the night, or drive a car through it, but that’s just what you have to deal with working in the town.”

The best part is that he has autonomy. “I pretty much get free rein to do the plantings,” he said. “I do have a budget I have to stick with, but other than that, my bosses are pretty good at just letting me do my thing.”

Most people interested in gardening can’t work on such a broad canvas, but we can certainly do our own thing in our own gardens (or potted plants if you don’t have a yard), and Wilkerson has words of wisdom for novice and home gardeners.

“Probably one of my favorite quotes is by H. Fred Dale,” Wilkerson said, “and it says, ‘My green thumb came as a result of the mistakes I made by trying to see things from the plant’s point of view.’ So my version of that is, ‘Don’t get frustrated when things die or don’t grow as well as you would want them to.’ Learn from it, try to figure out what you did wrong, what you need to do differently, and try it again. Not everything I plant lives. Not everything is your fault, either. Sometimes things just die. Have fun and enjoy it.”

If you’d like to be responsible for helping green things grow but don’t have the time or skills to make it happen, Wilkerson pointed out the Branch Out Program of Farmville, which takes donations to have trees planted around town.

Is there value in municipal horticulture? It’s not necessary in the way keeping up roads or bridges is, so why engage in it? “You could probably compare it to art?” Wilkerson said. “It’s subjective. Obviously, it’s environmentally beneficial. And it makes you happy, hopefully, whether consciously or unconsciously.”

Wilkerson clearly demonstrated he had the skills to do his job anywhere green things could grow; but, he said, there’s only one place he really wants to do it.

“The more I travel, the more Farmville is home, and I appreciate it, and I’m just really grateful to be able to contribute to the community in a very visible way,” he said.

If you would like to donate to Branch Out Farmville, visit online at farmvilleva.com/branch-out-in-farmville/.