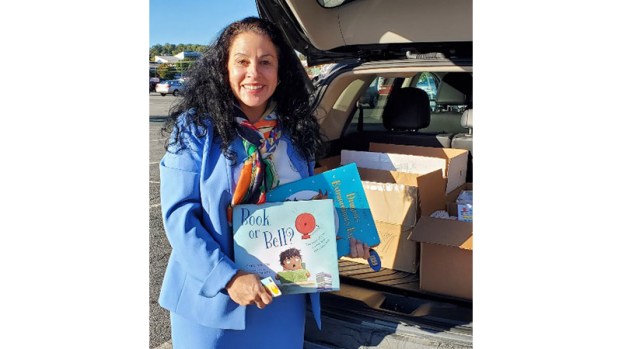 Ginny Gills, principal of Cumberland Elementary, drove up to get the books from Book Baskets.

QuickStart Tennis of Central Virginia, Inc. (QCV) is pleased to report that Book Baskets, a Charlottesville/ Albemarle nonprofit involved in gifting books to kids for more than 26 years, has given 271 books to QCV on behalf of Cumberland elementary and middle schools in Cumberland County for their Fall Festival on Oct. 28.

“Tennis connected us to Book Baskets,” QCV QuickStart Coordinator Lynda Harrill said. “James Henter, son of Ioline Henter, a Book Baskets board member, reached out about volunteering with afterschool tennis programs earlier this fall. COVID has shut down those activities, so I told him about our Racquets for Reading!!! initiative. He then told me about his mother and her involvement with Book Baskets. Book Baskets normally provides books to 30 organizations in the Charlottesville/Albemarle area on a regular basis, so the Cumberland festival, being a one-time event two counties away, was a little out of their wheelhouse. The board, however, approved a request we made for books for Cumberland and several weeks later, we were able to get books for kids in that county. Ioline did an awesome job of selecting and packaging the books for the different age groups to make distribution at the festival much easier. Cumberland Middle School is included in the festival for the first time, so there will be a wide range of kids.

“This year’s festival will have a Willy Wonka theme to promote reading,” she added. “By lucky coincidence, shortly after I connected with Book Baskets, Cumberland Elementary Principal Ginny Gills asked me if I knew of anyone who might have a few books to donate for ‘Golden Ticket’ giveaways. Each kid who receives a Golden Ticket will get to select a book to keep. Ginny’s timing turned out to be perfect, as 271 kids in Cumberland County will now benefit from Book Baskets’ generosity. Ginny is always so appreciative and is a great community partner, and Ioline and Book Baskets are rock stars for making this happen! Tennis is a great sport for connecting people and making nice things happen.”