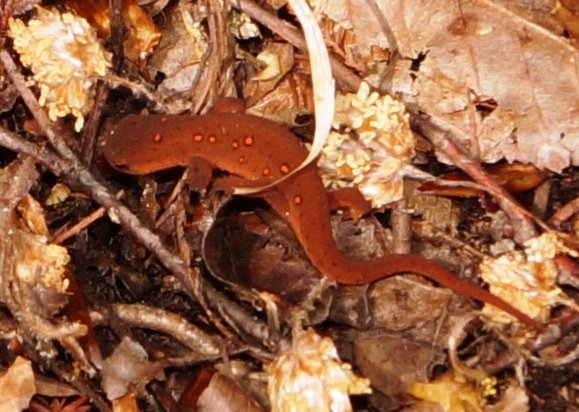 Although beautiful, the Red Eft salamander’s skin is poisonous.

A different kind of salamander

In our area, we have a number of species of salamanders living here, and they can have a variety of different lifestyles. A few such as the Spotted and the Marbled spend their larval stage in an aquatic environment then leave the water to spend the adult part of their life living terrestrially. Once mating takes place, the females will lay their eggs in the water. Some, such as the Mudpuppies and the Sirens, spend their entire lives aquatically. Then there are others, such as the Eastern Slimy, that are entirely terrestrial. But there is one that has bucked the system and has its own way of doing things. The eggs are laid in the water and soon turn into larvae. Once the larvae are old enough, they then emerge from the water to begin the next phase of life on land as a juvenile. There they generally remain for two or three years and then return to the water, transforming into an aquatic adult to spend the rest of its life and to breed. This salamander is known as the Red-spotted or Eastern Newt.

The larvae of this species leave the water sometime in the summer to fall to begin the next stage of life know as a Red Eft. The appearance of this creature is very striking and quite beautiful. The skin of it, however, is poisonous, so they seem to have little trouble with predators. Once the efts transform into adults and reenter the water, they change from that reddish/orange color to an olive green with red spots running down their back.

I provide assistance in a Virginia Master Naturalist (VMN) project that’s concerned with the monitoring of the Spotted and Marbled Salamander breeding activities in vernal pools in select areas. We’ve been monitoring these pools since 2014 and in one particular pool in Sussex County that I visit, from using a dip net, I occasionally find one of the adult newts. Those newts feed on a number of types of aquatic creatures, including amphibian eggs. As there are usually a lot of salamander egg masses there, as well as frog eggs and tadpoles, I’m not surprised to find the newts there.

In the warmer times of the year, if you find yourself along a body of water in the woods, you just might see a Red Eft walking about. With their poisonous skin, they tend to be a bit fearless and can sometimes be seen out in the open.

During a plant clinic on Sept. 18 at the Smithfield Farmer’s Market, a visitor asked why her Red Maple (Acer... read more