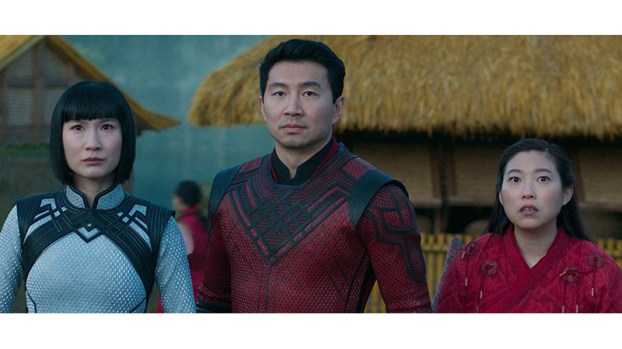 Picture are, from left, Xialing (Meng’er Zhang), Shang-Chi (Simu Liu) and Katy (Awkwafina) in Marvel Studios' SHANG-CHI AND THE LEGEND OF THE TEN RINGS. (Photo courtesy of Marvel Studios.)

Movie Review: Shang-Chi and the Legend of the Ten Rings

Shang-Chi is one of the best Marvel movies, period. I cannot tell you how much fun I had in the theater watching this film, due in large part to the enormous amount of heart exuding from the brilliant screenplay. Not only does the movie have the best fight scenes I have probably ever seen on screen, but it immediately gets the audience to fall in love with the new lead characters in a way I have not seen from a Marvel film since “Black Panther” or even “Guardians Of The Galaxy.” And in both of those movies, the actors were at least familiar faces. Major props to Simu Liu who may not have been a known quantity, but launched a public campaign for the role of Shang-Chi, got the part, and made the role his own.

Generally, Marvel films capitalize on the built-in audience for known characters like Iron Man, Thor, Black Widow, etc and don’t need to spend the time to get the audience to care about them; we already do. But Shang-Chi is a lesser known character and writer/director Destin Daniel Cretton does a phenomenal job of making us care about him and the other people in his orbit from the very first scene. I can personally attest to this as my fingernails are now nubs because I was so anxious during every fight scene.

Shaun (Simu Liu) and his best friend of 10 years Katy (Awkwafina) are valets at a swanky hotel, getting their thrills taking fancy cars on joy rides and partying late into the night at a karaoke bar. Their lives seem pretty run-of-the-mill. That is, until one day on the bus to work, a gang of men attack Shaun to reclaim the jade pendant around his neck, which was given to him by his late mother. When Shaun holds his own against these guys, flying through the air to try to save the passengers and incapacitate the baddies, Katy realizes she may not know her friend as well as she thinks she does. And things begin to look even more dire when Shaun realizes the bad guys took his pendant and may be on the way to harm his sister (Meng’er Zhang). So he and Katy jump on the next plane to Macau to try to save her life.

On the plane, Shaun informs Katy that his real name is Shang-Chi. He grew up in China and was forced by his father (Tony Leung) to become an expert in martial arts following the tragic death of his mother. When his father asked him to go on his first assassination mission, Shang-Chi ran away from the life he knew… including his little sister. Now it is up to him to face his problems, protect his family (and :ahem: the world), and bring his father down once and for all. But about those rings…

Simu Liu and Awkwafina in Shang-Chi

I will not pretend to be an expert in martial arts in movies. In fact, I am embarrassed to say I have not watched a ton of fight-centric movies. But I was completely mesmerized by the action scenes in “Shang-Chi.” They are so beautifully and artfully choreographed, it is almost like watching the characters dance, particularly in the scenes where we learn more about the fighting style of the Ta Lo people. I have seen enough movies to know our lead characters were never *actually* in any danger, but I was still on the edge of my seat in every fight scene. That ability to still create tension is the sign of an amazing fight choreographer, stunt performers, actors, and most importantly the director.

Of course the fight scenes are the big set pieces of the film, but to me the biggest show-stopping moments were those that involved the emotional scenes between the characters, particularly the ones between Shang-Chi and his mom. Without getting into spoilers, you better believe I started crying during some of those flashbacks… and I bet you will at least get a little teary-eyed too. It’s incredible how much character development and history the writers packed into one 120 minute movie, but I was more than along for the ride.

Do not base your decision on whether to see “Shang-Chi” off of the trailers; they do not do the film justice. The movie is actually a refreshing addition to the typical superhero franchise and an absolute blast that is going to leave you wanting more. So much so, when it ended I found myself already looking forward to what is seemingly next for Shang-Chi and Katy. The new “Doctor Strange” perhaps? Stick around for one mid-credit scene and a second scene at the very end of the credits for more clues on what is to come next.

Waterworks Players is pleased to announce the cast for its fall production of The Odd Couple: Female Version. Set in... read more