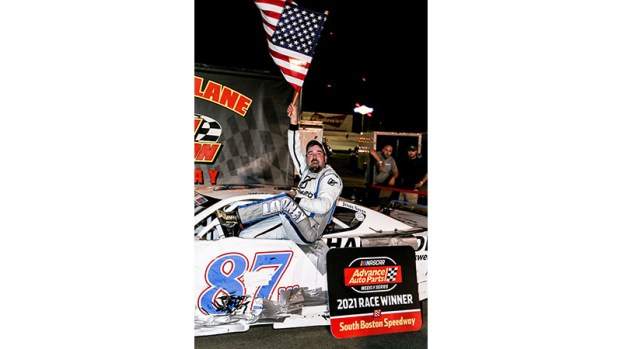 On a night where virtually every car in the field was damaged in one mishap or another Stuart Crews of Long Island scored his first career victory in the NASCAR Advance Auto Parts Weekly Series Late Model Stock Car Division and veteran Mike Looney earned a win as they split victories in Saturday night’s Halifax Insurance NASCAR Late Model Twin 75s racing program at South Boston Speedway.

“I’ve been racing Late Models for four or five years now and sometimes I didn’t think a win would ever come,” Crews said. “We finally did it. All of the hard work has paid off.”

Crews, the pole winner, was one of seven cars that escaped a massive 11-car pileup on the backstretch on the opening lap of the first 75-lap race. Looney was among the drivers whose car was damaged in the melee. Peyton Sellers, Thomas Scott, CARS Tour standout Justin Johnson, Jacob Borst, Jason Barnes, and Terry Dease were also among the drivers involved in the opening-lap mishap.

Crews led the entire distance but had to fend off challenges from Crews and eventual third-place finisher Josh Oakley of Rougemont, North Carolina to secure the win in the opener.

Camden Gullie of Durham, North Carolina and Chris Elliott of Bullock, North Carolina rounded out the top five finishers in the 19-car field. Only five cars finished on the lead lap.

Looney, who finished eighth in the opening race with a damaged car, started on the pole for the second 75-lap race as the result of an inverted start among the top eight finishers of the opening race. He survived a tough mid-race battle with Oakley, taking the lead from Oakley on lap 45 and pulling away at the end to finish 3.913 seconds ahead of Oakley and score his second South Boston Speedway victory of the season.

“The car got torn up on the first lap in the first race. I thought we were in trouble. The car took a pretty hard hit. Thankfully it was square in the driver’s side door and it took the hit pretty well and didn’t tear up the wheels or tires. After bad luck, we were trying to make any good luck we could.”

Looney led twice in the race for a total of 64 laps. There were three lead changes among three drivers.

The nightcap, like the opening race, was marred by a multi-car pileup on the opening lap that heavily damaged the cars of three of the race’s anticipated top contenders.

After having seen his early-season win streak snapped by an engine failure in his last outing, Nathan Crews of Long Island got back to his winning ways Saturday night, taking home the win in the 30-lap Budweiser Pure Stock Division race.

Saturday night’s victory was his seventh win in eight starts this season.

Johnny Layne of Halifax took the runner-up spot, finishing .777 of a second behind Crews. Layne’s second-place finish was his fifth runner-up finish of the season. Scott Phillips of Halifax, Justin Dawson of Nathalie and Joey Clay completed the top five finishers.

Dawson took the lead from Andrea Ruotolo of South Boston on the sixth lap and led the final 10 circuits to take the win over Ruotolo, who secured his best finish of the season to date.

Saturday night’s win was the third win in a row for Dawson who now has scored five wins in his six starts this season.

South Boston Speedway will host its biggest event of the season when NASCAR racing action returns to “America’s Hometown Track” on Saturday, July 3 with the Thunder Road Harley-Davidson 200.

The first race of the night will get the green flag at 7 p.m.

Following the night’s final race fans will be treated to one of the region’s top Fourth of July fireworks displays.