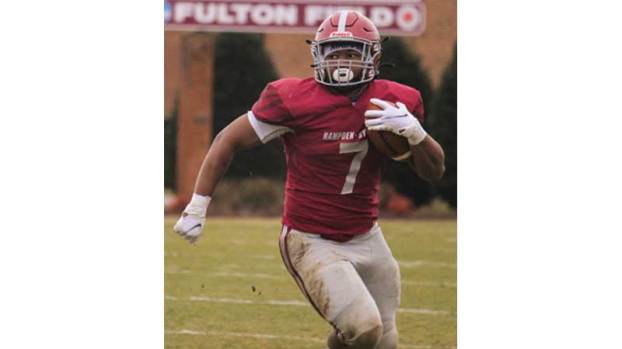 Senior running back Cole Becker added a touchdown on the ground as well, while junior linebacker Peyton Carneal, junior defensive back Noah Dowdy and sophomore safety Will Shulleeta each had interceptions. Senior defensive lineman Tyler Lohman added a fumble recovery. H-SC led 7-0 at halftime against the Knights (before adding scores in the third and fourth quarters of the opening game and the first action for the hosts in 469 days.

Following a scoreless first quarter, H-SC got on the scoreboard early in the second quarter at 11:47 when Frost scored on a 1-yard touchdown run. Sophomore placekicker Jack Breedlove added the first of his three extra points for the 7-0 advantage. The scoring drive covered 65 yards on 11 plays, with Frost gaining 17 yards on the ground, including a 13-yard gain, while junior transfer quarterback Tanner Bernard had two 14-yard completions to junior running back Kaleb Smith and a 10-yard pass to senior captain and wide receiver Dillon Costello. Bernard added a key, 10-yard run for a first down as well.

The Tigers took the first possession of the third quarter and marched 73 yards on 11 plays that culminated with a 1-yard touchdown run by Becker at 10:13. Breedlove’s PAT made it a 14-0 lead for the hosts, who ran the ball nine times on the drive, though the big play was a 19-yard reception by Costello from Bernard. Smith had 15 yards on the ground, Frost added 13 yards and Becker had a 12-yard run on the scoring possession.

H-SC added its third score late in the fourth quarter with just 2:56 remaining when Frost found the end zone for the second time, this touchdown from 2 yards out, and Breedlove added the PAT to provide for the final margin. It was a six-play, 21-yard drive that was set up by Carneal’s first collegiate interception that he returned 19 yards. The big play was an 18-yard reception made by senior wide receiver Blake Page on a pass from Bernard that was tipped before Page made the catch on the sideline at the 3-yard line.

H-SC’s defense was strong all day, limiting SVU to only 152 yards of total offense, including just 64 yards rushing and 88 yards through the air.

Lohman and freshman defensive back Will Pickren led the Tigers with six tackles each, including one for a loss and the fumble recovery in the fourth quarter by Lohman, while Pickren provided two big hits in the second half — one in the third quarter and one in the fourth.

Davis Pinkston passed for 88 yards (13-for-16) with one interception, adding seven rushes for 39 yards on the ground for SVU. Woodson Francois had four receptions for 29 yards, and Skylar Johnson added 30 yards receiving on three catches for the Knights. Mitchell Lesue had a game-high 13 tackles, while Bishope Apodaca added 12 tackles. Justin Mitchell caught the interception for the visitors.

The Tigers will travel to play at Shenandoah University Friday, March 5, at 7 p.m. in Winchester.

Hampden-Sydney College (H-SC) Athletics announced Feb. 21 that the school’s basketball team will not complete the remainder of its 2021... read more