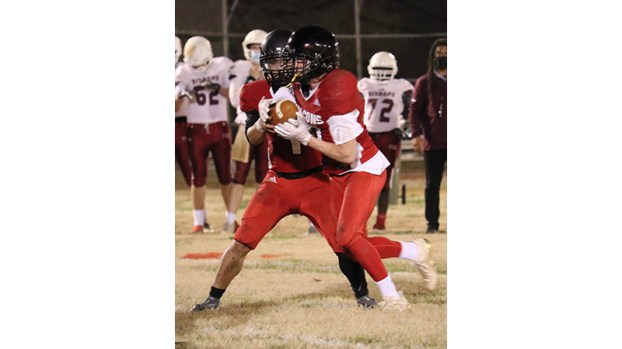 To be clear, Fuqua School and Richmond Christian School did play football Saturday afternoon, March 20, but unique circumstances led the varsity squads to produce a final score more reminiscent of a basketball game than a gridiron showdown.

The Falcons ultimately adapted to the situation, though, and pulled away in the fourth quarter for an 82-62 road win over the host Warriors.

He noted he has never been part of a football game with that many points scored — 144 — and a team of his has never put up 82 points, though it could have done so in certain blowout games. But this was not a blowout game.

“It was really a necessity to score that many points,” he said. “We didn’t get up by three scores till about middle to late in the fourth quarter.”

Manis said the possibility of the game did not even exist until Wednesday night, March 17, when Fuqua School Athletic Director Mike Edwards received a message from Richmond Christian stating that the Warriors had their game against Greenbrier Christian Academy removed from their schedule for COVID-related reasons. The Warriors were looking for another opponent, and Edward relayed the message to Manis.

He said they figured there might be 15 to 17 players available amid spring break, but on Friday, they had only 13 to 14.

“I said, ‘Guys, do you still want to play?’” Manis said. “And they were all for it. So we made the decision that if the players wanted to play, I was going to be there to coach them.”

Falcons Assistant Coach Rick Davis was out of town during spring break to see his son, former Fuqua standout Brad Davis, play for undefeated VMI, and 11 Falcons players were unavailable to play Saturday in Chesterfield.

“We went and showed up to play a game with 13 kids, and we didn’t have any subs, and at halftime, I think it was a two-point game,” Manis said. “I told the kids, ‘It’s about showing up and playing. You’ve got all the excuses in the world right now, but excuses don’t get you anywhere. It’s what you can do, both in life and in a game.’”

He said his team kept trying to figure out where the soft spot was in the Richmond Christian defense and finally found it late in the contest.

“I think we ran the same play about eight or 10 times in the fourth quarter to pick up anywhere from 30 to 70 yards, and most of them ended up being touchdowns,” he said

Senior running back Jackson Allen finished the game with 23 carries for 363 yards and four touchdowns, and he also had two receptions for 25 yards and a score.

“There were so many stats, it was hard to keep up with,” Manis said.

Fuqua missed the presence of some of its key defensive standouts, including senior Sean Bradley Jr., who is injured, and seniors Hayes Barton and Zach Eason, who were out of town.

The Falcons were also without senior kicker Sabastian Cannady.

The coach also said some of his team’s game plan ended up being irrelevant because Richmond Christian’s starting quarterback was out.

“We had kind of prepped for one thing and were expecting a whole lot of downfield passes and just trying to keep that kid in the pocket,” Manis said. “And they ended up having one of their receivers or running backs playing quarterback.”

The Warriors utilized some screen passes instead of firing the ball downfield.

“We went down and scored pretty quick, and they took the first play they had on offense for a touchdown on a screen pass, and we just couldn’t stop their run game and their screen passes until about the third quarter,” Manis said. “We made some adjustments at halftime. It was just crazy, never seen anything like it. Neither team could stop each other.

“If we’d had our full complement of guys, I feel like things wouldn’t have got out of hand for both teams that bad,” he added. “But you travel 13 guys, the kids wanted to play, we showed up and played.”

Manis noted that because of all the scoring, the game was also one of the longest he had ever been a part of, clocking in at around four hours.

Backstrom is Big South Pitcher of the Week