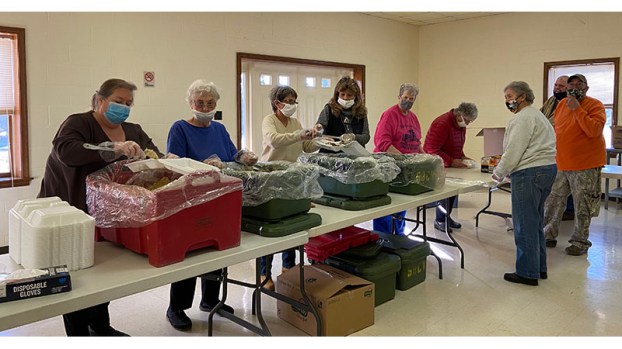 Volunteers provide hot meals to those without power

The caring nature of the Prince Edward community was evident Saturday afternoon, Feb. 20, at the Darlington Heights Volunteer Fire Department (DHVFD) fire station as volunteers and county officials worked together to facilitate a hot meal distribution for residents impacted by power outages due to the Valentine’s weekend ice storm.

The fire station in Darlington Heights was just one of five meal pickup locations across the county during a distribution that took place Saturday and Sunday.

Community volunteers and firefighters were working cheerfully in the station Saturday evening as they portioned and packaged food for residents to take home.

According to Assistant County Administrator/Emergency Management Coordinator Sarah Puckett, who was present during the 4 p.m. meal distribution on Saturday, the American Red Cross donated 1,800 hot meals across the two-day timeframe which were packaged and distributed across five pickup locations.

Additionally, Puckett said Dominion Energy on Saturday had also donated approximately 750 boxed lunches from Williamsburg and the remaining 250 boxed lunches from its meal distribution sites for the linemen after crews had left the area, providing an extra meal for citizens to take home for the following day.

The winter storm that hit the area last weekend downed trees and powerlines and caused widespread power outages. Saturday marked one week without power for thousands of homes in the area.

“It’s been a week today,” Ford said of her time without power.

When asked how she’s been coping without electricity, Ford said she’d had a rough week.

“Some nights I’ve been staying in Chase City with family, and then with my job, I had to come a little closer, so I’ve been staying at the motel, and really today is the first day I’m really getting out to come back here and get something to eat.”

Seven days without power had caused all of the food in Ford’s refrigerator to spoil.

“It’s been tough,” she said. “I just hope the power comes on very soon. They say they’re out there working and working, so.”

Some of the volunteers at the fire department on Saturday had also been without power for a week, such as Debbie Chaconas.

While scooping rice into a to-go box and sending it down the line to be filled with more food, Chaconas explained she lives only minutes down the road and had been without power since 5:45 a.m. last Saturday, Feb. 13.

She said her family was fortunate to have a generator which they have been using sparingly to get ready in the mornings and to cook at night. Her parents, she said, live in a building on their property and also have a generator. She’s been delivering meals to them throughout the week.

Although she was eager to regain power, she was more concerned Saturday with what others were going through.

“There are so many more worse off than us that don’t even have a generator and can’t cook, so whatever we can do to help them, we do it.”

Seward said he and Amaya are both part of Longwood University’s Honor Student Association and are often able to answer the call when assistance is needed anywhere in the community.

When they heard weekend distribution drivers were needed, they immediately signed up to help.

“The people who we have encountered have felt very blessed and very thankful for the service we have provided for them,” Amaya said as the two arrived back at the station after delivering meals.

Seward added it was evident some of the recipients they had delivered to that day were still without power. He said he himself has experienced week-long power outages in the past and was grateful when the community donated food after the contents of his refrigerator spoiled. He was happy to be there on Saturday returning the favor.

“I think programs like this are exactly what the world needs right now,” he said.

According to Puckett, the county was able through resource requests to the Virginia Department of Emergency Management to obtain five pallets of bottled water and 1,500 heater meals from the state on Wednesday, Feb. 17, for distribution to citizens.

The country reached a devastating record at the beginning of this week when U.S. coronavirus deaths topped 500,000, but national... read more