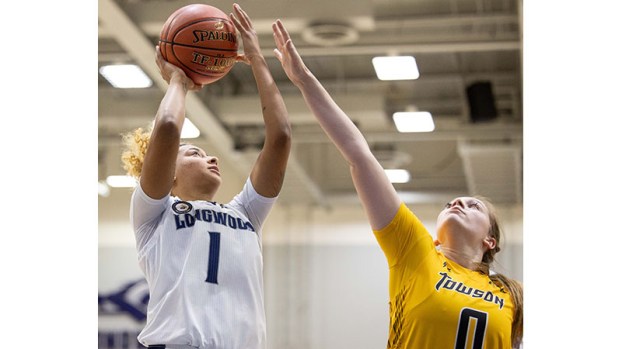 In another back-and-forth affair that has become a staple between Longwood University’s women’s basketball team and Gardner-Webb University, Gabrielle Caponegro hit a go-ahead jumper with less than a second remaining as the Runnin’ Bulldogs pulled out a 75-73 win over the visiting Lancers Saturday, Feb. 20.

Caponegro’s clutch shot snapped a three-game win streak for the Lancers (12-9, 11-5 Big South) and offset a Longwood effort in which it survived an early 15-0 Gardner-Webb run, a 25-14 first quarter deficit and a four-point fourth quarter deficit to take a four-point lead with 1:48 remaining.

However, the Runnin’ Bulldogs (8-12, 8-7 Big South), celebrating their senior day at Paul Porter Arena, rallied to end the game on a 6-0 run. Lauren Bevis hit a huge three to tie the game late, and Caponegro hit the game-winner in the closing seconds.

“I wouldn’t say it was a heartbreaker for us,” Lancers Head Coach Rebecca Tillett said. “We want to win every game and be great every time, but I thought our women did everything they could to put us in a position to win, and sometimes things in a game don’t go your way. That’s true in life. That’s true in basketball. You want to put yourself out of a one-possession game so that anything that goes on that might not fall your way doesn’t have the type of impact that it had.”

Longwood’s rally was its second in as many days, as it came from behind to beat Gardner-Webb in the series opener a day prior, 84-80.

The Lancer defense also locked up in the final quarter, as Longwood allowed just four points across the first eight minutes of the fourth quarter to put itself in a position to secure a second consecutive comeback win on the road.

“I thought our women’s effort in the fourth was incredible defensively,” Tillett said. “It’s what we are trying to look for in more than one quarter at a time, but I thought they did exactly what they needed to do to be in that position.”

However, the Runnin’ Bulldogs offense rallied in the final 1:48. After Jhessyka Williams hit 1-of-2 from the line to pull Gardner-Webb within three, Lauren Bevis connected from deep with just 18 seconds remaining to tie the game, 73-73.

After Longwood failed to convert at the free-throw line, Alasia Smith, who finished with 20 points for the Bulldogs, attempted a layup with five seconds remaining that was off the mark, leading to a scramble for the loose ball. The ball ended up in the hands of the senior Caponegro on the baseline, who knocked down a jumper with half a second left to cap a 6-0 Gardner-Webb run and secure the 75-73 win.

“I think what everyone is trying to do right now is build some momentum for the postseason, finish out the conference season strong,” Tillett said. “They are a very formidable opponent year-in and year-out. I think we learned a lot from this game, and film will teach us a lot.”

Longwood will stay on the road for its next series, paying a visit to first-place High Point University on Thursday, Feb. 25, and Friday, Feb. 26. Both games are set for 6 p.m. and will be broadcast on ESPN+.