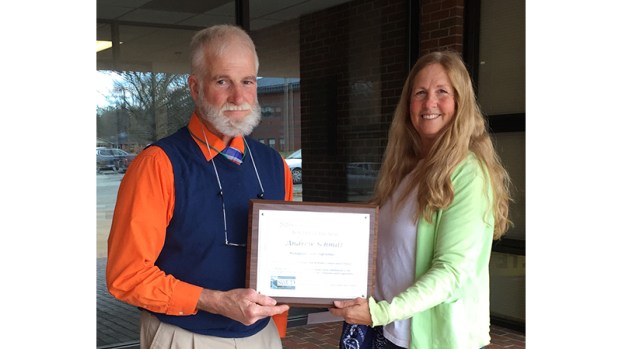 The Virginia Association of Soil and Water Conservation Districts awarded Andrew J. Schmitt, teacher at Buckingham County High School, as 2020 Conservation Education Teacher of the Year for the grades six through 12.

Schmitt is a retired senior chief in the U.S. Navy, serving for 25 years from 1984 to 2009. When he was stationed in Charleston, South Carolina, he was in charge of the Navy’s contribution to the Charleston Harbor Clean-up for two years in a row. When he was stationed in Norfolk, he headed up the ship’s participation for Cleaning the Chesapeake Bay Day for five consecutive years (1998 to 2003).

Schmitt attended the University of Wisconsin-Madison graduating with a Bachelor of Science in agriculture education. He grew up on a diversified dairy farm in Dane, Wisconsin, where he was very active in 4-H and FFA. His passion was to teach agriculture to students. He was hired by Buckingham County Public Schools in 2012 to teach agriculture classes (after previously teaching in Wisconsin, Indiana and Faquier County). After the school district realized he held a license to weld, they requested that he begin teaching welding classes in addition to agriculture classes. Being the team player that he is, and above all, wanting what was best for the students, he put on his welder’s mask, fired up his torch and put the Buckingham welding program on the map with students winning multiple local and state welding competitions. He tours Newport News Shipyard with his welding students each year and has the distinction of training the first female welder in Buckingham County.

In spite of his extreme involvement in all things FFA, Schmitt has maintained a connection with his true passion, conservation education, by serving as Envirothon Coach for Buckingham County High School. The Virginia Envirothon, sponsored by Dominion Energy, is a team based natural resources competition for high school students. For four years, the BCHS Envirothon team has qualified and competed at the area and state level. Due to his involvement in the Envirothon program, Schmitt has become more passionate about exposing the students to other environmental science and natural resources topics. With that focus, he has partnered with the district to organize an annual field trip to the Chesapeake Bay Foundation’s Brock Environmental Center.

Schmitt works with an array of students, whether they are bound for the work force or college. He heavily encourages environmental studies for college-bound students after introducing them to the field through Future Farmers of America and the Envirothon Team. He is instrumental in promoting the Peter Francisco Soil and Water Conservation District’s scholarship program to these students as well. Schmitt also serves on the ECMC Nominating Committee, which is a scholarship program for Buckingham County seniors.

Outside of his educational duties in the school system, Schmitt and his wife operate a farm in Buckingham County. They raise cattle, sheep, goats, pigs, chickens, ducks, geese, turkeys, rabbits, horses and donkeys. The variety of animals raised allows him to utilize them as needed for agriculture class labs. He hires students who need mentoring to work on his farm.

Schmitt said he was surprised when he learned he had won the honor.

“I feel truly honored, as this is a total surprise,” he said. “I think that during these challenging times we as educators need to be conscience of our role in helping our students understand the need to conserve even our very basic necessities as well as the precious world around us as stewards of one of God’s greatest gifts.”

School to go virtual until Feb.

Cumberland County Public Schools (CuCPS) has extended students’ return to virtual-only learning from one week to the remainder of the... read more