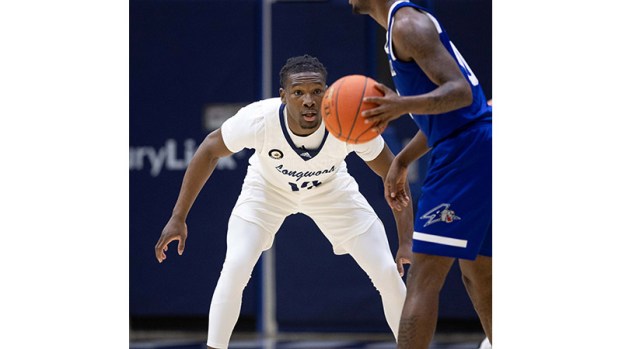 For the first third of the season, the injury-plagued Longwood University men’s basketball team played well short of a full squad.

Nearing a return to full health as the 2020 calendar came to a close, the Lancers made good use of their newfound depth Thursday night, Dec. 31, against Big South Conference frontrunner University of North Carolina (UNC) Asheville.

Powered by a team-high 14 points from sophomore guard Heru Bligen and a second straight 30-point effort from the bench, Longwood took down Big South unbeaten UNC Asheville 65-55 in Willett Hall.

Bligen, in only his fourth game back since injury, came off the bench to lead a resurgent Lancer team by hitting 5-of-9 shots from the field and playing lockdown defense against UNC Asheville’s high-powered attack.

Fellow reserves Justin Hill, a freshman guard, and Ilija Stefanovic, a senior forward, scored eight points apiece as the once-shorthanded Lancers used a nine-man rotation to outlast the Bulldogs in their final game of 2020.

“I told the guys (after the win) we have had stretches throughout every single game where we played good basketball and we played competitive basketball,” Longwood Head Coach Griff Aldrich said. “Tonight was probably the first night I felt like we had a full competitive effort from start to finish, particularly on the defensive end. We out-competed them, we defended the heck out of them, and I’m really proud of how our team competed tonight.”

Just 24 hours after UNC Asheville (4-5, 3-1 Big South) pulled away late in the second half to claim an 80-73 win in game one of the series Wednesday, Dec. 30, the Lancers held strong to fend off another second-half surge from the Bulldogs. Longwood built a lead as large as 12 points in the second half before UNC Asheville rode the hot hand of L.J. Thorpe to a 9-2 run that cut the lead to 45-42 with 11:06 to play.

However, Bligen drew a foul on Longwood’s next possession and sank both free throws, and the Lancers followed with a defensive stop and a Wade layup to extend the lead back to seven. Longwood did not allow UNC Asheville to score on back-to-back possessions the rest of the way and held the Bulldogs to their lowest scoring total and field goal percentage all season.

Whereas Thorpe went off for 18 points in the final 12 minutes, 32 seconds of Wednesday’s game to help the Bulldogs overcome a five-point Longwood lead, the Lancers held UNC Asheville to just seven points on their final 15 possessions Thursday.

That end-to-end effort also came by way of a more rested lineup, as the return to form of Bligen and Wade, and even six minutes from formerly injured junior guard Jermaine Drewey, allowed Aldrich to limit consistent 30-minute-men Munoz and Hill to 27 minutes apiece. Hill, who started the first nine games of his collegiate career, came off the bench for the first time Thursday in a rotation with Munoz that saw the duo combine for 13 points, 11 rebounds, five assists and two steals.