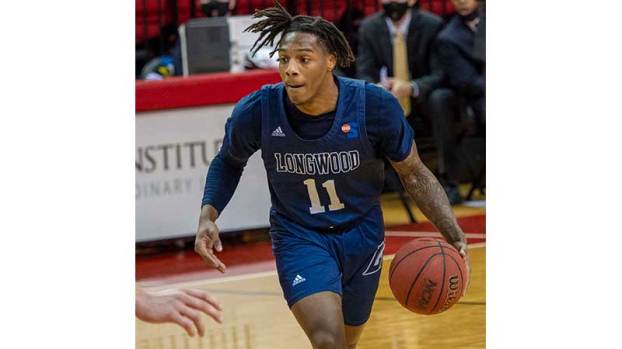 Longwood University freshman guard Justin Hill answers the call during his 38 minutes of play against host Virginia Military Institute on Tuesday night, Dec. 1. Despite the Lancers’ 84-71 loss, he scored 15 points, handed out nearly half his team’s assists, with six, and grabbed three steals. (Photo courtesy of VMI Athletics)

VMI rallies late to pull away from Lancers

Behind a second straight 20-point game from senior guard Greg Parham, the Keydets (2-1) wore down the Lancers and pulled away in the final 10 minutes en route to an 84-71 win and a sixth consecutive non-conference home victory in Cameron Hall.

“As I told the guys, credit VMI — they just simply outcompeted us tonight,” Longwood Head Coach Griff Aldrich said. “From start to finish, they outcompeted us. That is a centerpiece to who we want to be, and we fell short. (VMI) just wanted it more, and I think you saw it throughout the game.”

The Keydets wore down a shorthanded Longwood (0-2) squad that for the second straight game played without key guards DeShaun Wade and Heru Bligen, both sidelined with injuries. In place of those two veterans, the Lancers dug into their deep but unseasoned bench and started a pair of freshmen — Jesper Granlund and Justin Hill — for the second straight game while also calling on four other Lancers who were playing for only the second time in a Longwood uniform.

“This is our second competition,” Aldrich said. “These feel to me a little bit more like scrimmages than actual games. At one level, I’m just happy to be playing. These are teaching points for us. You learn lessons. You want to learn them hopefully with wins, but we learned a tough lesson today.”

Parham and his fellow Keydets doled out those lessons behind a stifling defensive effort and a multi-pronged offensive attack that produced four double-digit scorers. Parham’s 22 led the way.

Longwood (0-2) kept pace for the first 30 minutes of the game, with both teams trading the lead seven times and neither stringing together more than seven unanswered points. However, with the score tied 49-49 at the 12:48 mark, the Keydets broke the game open with a 14-6 run bookended by a Parham three-pointer that extended the lead to nine points. VMI led by at least two possessions the rest of the way.

An off-shooting night caught up to the Lancers in the end with the team hitting just 2-of-11 field goals during a stretch of 6:48 after Parham’s punctuating three-pointer. The lone buckets during that stretch came from the freshmen Granlund and Hill, who for the second straight game both played 30-plus minutes.

Hill finished with 15 points and Granlund 8, while veteran point guard Juan Munoz led the team for a second straight game with 18. Hill dished six assists and attempted a team-high 21 field goals, while fellow newcomer Zac Watson — a junior transfer from UC Riverside — also flirted with a double-double with eight points and eight rebounds.

However, baskets were hard to come by all night for Longwood against VMI’s defense, as the Lancers shot just 39.4% (26-of-66) from the floor and made 6-of-26 three-pointers.

“You have to elevate your focus on the defensive end (when shots aren’t falling),” Aldrich said.

His 2019-20 Lancers finished as the third-best defensive team in the Big South Conference, holding opponents to 68.6 points per game.

Longwood had a quick turnaround before its next matchup, which sent the Lancers back to Farmville for their 2020-21 home opener against Regent University in Willett Hall on Thursday evening, Dec. 3. That game began at 6 p.m. and aired on ESPN+ and WVHL 92.9 FM.

Longwood is currently set to remain at home Tuesday, Dec. 8, hosting North Carolina A&T at a time to be determined. That game will also air on WVHL 92.9 FM.

The Longwood University men’s basketball team entered the 2020- 21 season with a host of new faces. Even after dropping... read more