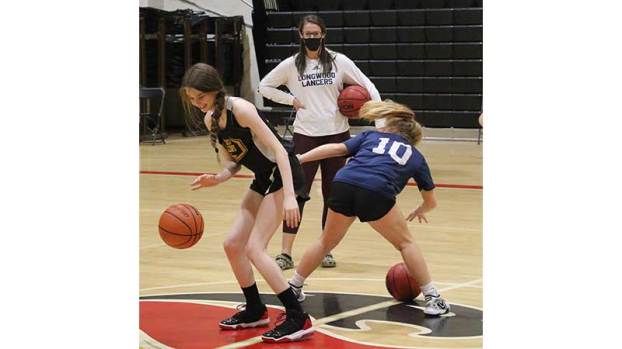 “The girls are really excited,” she said Wednesday, Nov. 25. “They want to learn, and I think they’re excited for our first game. Definitely, they always want to practice.”

She said they were even set to practice on the weekend following Thanksgiving.

The Lady Falcons open their season Tuesday, Dec. 8, when they host Brunswick Academy at 5 p.m.

Murphy has formed some expectations for her 10-member team based on what she has seen in preseason practices.

“I think we will have some good defense,” she said. “We’re aggressive there, I definitely think that. I’m hoping to score more points this year than the previous years, but I think it’s mostly going to be our defense (that) is what’s going to help us.”

Murphy has identified on-court leaders for this squad.

“I think there’s a couple of girls, because I think Sophie (Watson) and Liz Hall will definitely bring the competitiveness,” she said. “They’re both seniors, and I think they will lead us in each game. But then we also have Kassidy (Knott), Rachel (Mason), Hadley (Puckett) and Meredith (Schmidt) who will also bring a lot. I know during practice they’re really starting to help each other out, and I think that’s huge when we get into the game situation.”

Hall will likely play in the post, the coach said, and Watson may move around a bit, spending some time in the post and at the forward position.

Murphy said she may rotate different people into being her team’s primary ball handler, though it is possible the point guard will end up being Knott.

Gearheart, Gee and McDowell are brand new to basketball, but Murphy indicated everyone has been working on the fundamentals in practice.

“We’ve done a lot of dribbling, passing, layups, jump shots, kind of just getting back into the swing of things,” the coach said. “I know a lot of people, they haven’t done stuff for a long time because of COVID.”

Fuqua will play a nine-game regular season, facing each conference foe once from the Lady Falcons’ new conference, the Virginia Colonial Conference.

The season has been condensed due to the continuing COVID-19 pandemic.

VMI rallies late to pull away from Lancers