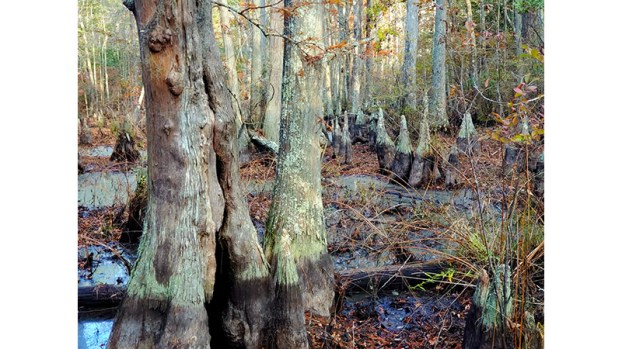 Bald cypress trees have enlarged trunks where they meet water and distinctive knobby knees that protrude from surrounding water and mud.

Bald cypresses are an atypical conifer

The bald cypress (Taxodium distichum) was first described in 1640, and ever since then writers have been impressed by its ability to create a dramatic atmosphere.

In his 1847 poem, Evangeline Longfellow described the trees as having “towering tenebrous boughs” that “wave like banners that hang on the walls of ancient cathedrals.” John Muir, the naturalist, was equally impressed by bald cypresses’ ability to affect his moods. He wrote about the “dark, mysterious cypress woods” and how they filled him with a sense of loneliness.

Indeed. Wander through the bald cypress swamp at First Landing State Park early on a foggy autumn morning and you’ll find yourself surrounded by trees draped in ragged veils of Spanish moss and reflected in seemingly bottomless, inky water. If there ever was a location that whispered creepy, eerie and strange, this is it. Visit on a crisp, sunny fall day, however, and the same area is a glorious array of brilliant colors, interesting forms and textures.

Yes, bald cypresses are not your typical trees. They’re conifers, but not evergreens, hence the common name bald cypresses. They not only lose their needles in the fall, but are slow to leaf out in the spring. The needles are short, feathery and arranged in pairs. In spring, they’re pale yellowish green, while in autumn, they’re a brilliant gold or orange. Like other conifers, bald cypresses produce seed bearing cones. In this case, they’re small, round and generally contain about 16 winged seeds each. The seeds must be saturated with water for several months in order to germinate.

Bald cypresses are tall with large trunks, have peeling bark and can live for hundreds of years. At least 600 years is typical with growth continuing for the first 200 years. The oldest known bald cypress is in the Black River Preserve in North Carolina. Its been dated as 2,624 years old, which means it was alive when the Hanging Gardens of Babylon were built by King Nebuchadnezzar.

And then there are the knees. Bald cypresses have strange protuberances poking out of the water. They’re called pneumatophores, and scientists haven’t been able to verify their purpose. There is speculation that they help anchor the trees and also convey oxygen to the roots.

Bald cypresses are highly adaptable to both wet and dry conditions. They grow quite happily in the dry Texas hill country and as far north as Milwaukee.

Bald cypresses provide habitat and food for many animals. Turkeys, ducks, and squirrels eat the seeds. Bald eagles and ospreys nest in the branches, while smaller birds nest in rotting knees.

The next time you visit a swamp with a grove of bald cypresses, soak up the atmosphere and then consider how much history the trees have witnessed. They are awe inspiring.

DR. CYNTHIA WOOD is a master gardener who writes two columns for The Herald. Her email address is cynthia.crewe23930@gmail.com.

A cool find on a hot day