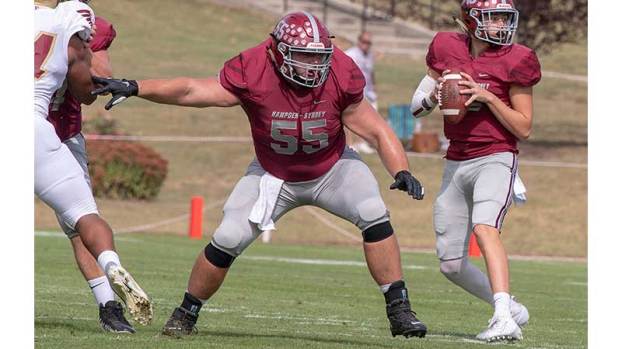 Hampden-Sydney College senior offensive lineman Tyler Howerton, No. 55, is a semifinalist for the 2020 William V. Campbell Trophy, which recognizes an individual as the absolute best football scholar-athlete in the nation for his combined academic success, football play and exemplary leadership. (Photo courtesy of Hampden-Sydney College Athletics)

1 of only 9 semifinalists nationwide with perfect 4.0 GPA

Howerton is one of only nine among the record 199 semifinalists to have a perfect 4.0 GPA, while one of only two from the Old Dominion Athletic Conference (ODAC) and the 40 selected from NCAA Division III.

Celebrating its 31st year, the award recognizes an individual as the absolute best football scholar-athlete in the nation for his combined academic success, football performance and exemplary leadership.

The NFF will announce 12 to 14 finalists in November, and each of them will receive an $18,000 postgraduate scholarship as a member of the 2020 NFF National Scholar-Athlete Class presented by Fidelity Investments.

Later this year, one member of the class will be declared as the winner of the 31st Campbell Trophy presented by Mazda, having his postgraduate scholarship increased to $25,000 and receiving his own 25-pound bronze version of the iconic statue.

Howerton is a dean’s list student majoring in physics with a minor in mathematics. He has been named a 2020 Barry Goldwater Scholar (nation’s most prestigious scholarship in the natural sciences, mathematics and engineering), H-SC’s first physics major to receive the award.

Howerton has served in numerous leadership roles within the campus community as well, most notably on the Appeals Committee at the college during 2020-21, responsible for reviewing Honor Court and Code of Conduct cases appealed by students.

Howerton was named to the 2019 Academic All-America Division III Football First Team as selected by the College Sports Information Directors of America (CoSIDA), as well as the Academic All-District 5 First Team.

He started all 10 games on the offensive line at either center or right guard a year ago. Howerton has started every game (29) since his arrival on the Hill and is a three-time ODAC All-Academic Team honoree (2017-19) and was a third-team All-ODAC selection in 2017.

Howerton is the son of John and Nancy Howerton, of Alexandria.

Sunday, Sept. 13, was a momentous day for Joe Reed, his family, friends and all of Charlotte County. Reed, who... read more