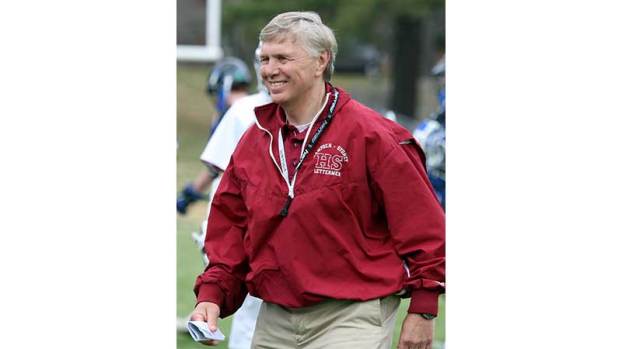 Rostan was a 2017 inductee into the H-SC Athletic Hall of Fame.

“I am incredibly humbled and thankful to the IMLCA for this recognition,” Rostan said. “I am grateful for the opportunity that coaches Jack Emmer and Chuck Winters gave me to play collegiate lacrosse at Cortland State. Thanks also to Coach Fred Acee for my first collegiate coaching opportunity at Farmingdale College.”

“Congratulations to Coach Ray Rostan on this incredible honor.” he said. “The IMLCA Hall of Fame is one of the highest honors in our sport, and for a coach to be recognized by former colleagues is extra special. On the field, Coach Rostan was one of the best, but what distinguished him as a coach was his integrity and ability to develop men of character. This is a proud day for Tiger Lacrosse.”

Ray Rostan was at the helm of the H-SC men’s lacrosse program for 32 seasons before his retirement in 2016. He compiled a record of 302-172 with the Tigers and an overall record of 342-197, ranking him eighth all-time in coaching victories in all NCAA divisions.

Seventeen of Rostan’s teams finished the season with a top-20 national ranking, and he led the Tigers to eight NCAA Tournament appearances and four Old Dominion Athletic Conference (ODAC) Championships. He coached 66 All-Americans, five Academic All-Americans and has seen 13 former players inducted into the Hampden-Sydney Hall of Fame.

Rostan was named the ODAC Coach of the Year five times, most recently in 2016, and he was the 1998 and 1999 winner of the Francis “Babe” Kraus Award, given to the National Coach of the Year.

Prior to his coaching career, Rostan was a member of the 1973 Cortland State National Championship team. He later played professionally in the National Lacrosse League for the 1974 National Lacrosse League champion Rochester Griffins and for the Long Island Tomahawks in 1975. Rostan has also served as the assistant coach and defensive coordinator for the 2002 U.S. National Lacrosse Team, he has served on the NCAA Men’s Lacrosse Committee, as chair of the U.S. Intercollegiate Lacrosse Association (USILA) Men’s North-South Game and on the USILA Committee for Coaching Ethics.

“Thank you to Hampden-Sydney College for 32 wonderful years,” Rostan added. “And I’d like to thank every one of our exceptional former players and coaches for our special lifelong relationships. Most of all, thank you to my wife, Karen, and our family for standing by me.”

Sports have been relatively scarce in 2020 amid the COVID-19 pandemic, but some athletic opportunities still exist for area residents,... read more