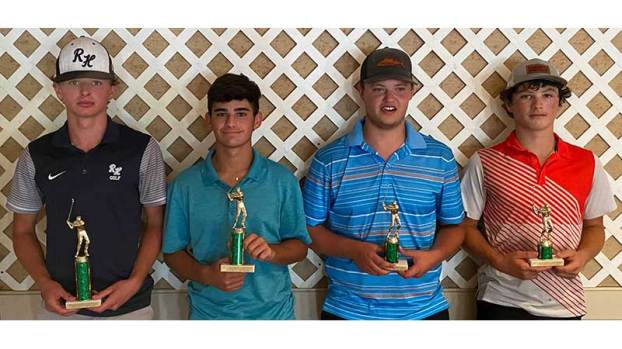 Members of the Southside Piedmont Junior Golf Association got in a good nine-hole round of golf during a Thursday, July 23, tournament at Lunenburg Country Club in preparation for this Thursday’s championship event in Bracey.

John Hite, the tournament director, was pleased with how the event unfolded.

“It was a real success that day,” he said. “It was a warm day, but the kids did a good job, and everybody walked in the afternoon.”

Randolph-Henry High School rising senior Brenden Francisco won the boys’ 16- to 17-year-old division by shooting a 40. Raymond and Bryant each shot a 46, but then they matched scorecards by hole, starting with their ninth holes, to break the tie.

John Hite stated junior golf attendance at the Kenbridge course has increased this year amid the COVID-19 pandemic.

“It’s been really nice that the governor has allowed people to get out and golf, and everything has been socially distanced — it’s boxed lunches, the kids just go to the hole that they’re starting on in advance,” he said. “We’ve taken measures to keep from getting the crowds together.”