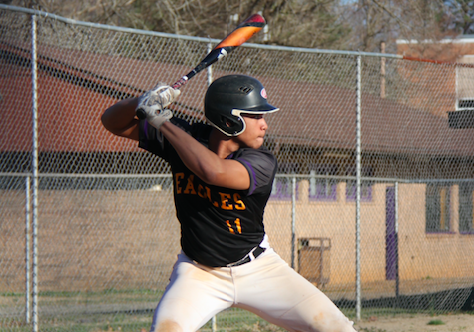 ‘A different level of competition’

Aliq Walker had been excited for his 2020 varsity baseball season at Prince Edward County High School.

The Eagles were already coming off a heavily abbreviated 2019 season, and 2020 was Walker’s senior year.

“We were coming back all ready to go,” he said. “We had high stakes on us and everything.”

Then the COVID-19 pandemic brought the spring to a halt after only a taste of preseason scrimmaging.

Walker said he was thinking about how the 2020 spring campaign might represent his last year to play baseball.

Thankfully, he has managed to get another chance to take part in America’s pastime this summer.

“Now, my travel ball team, we actually have started back up,” he said. “They’ve allowed us to have a season this year, so I’m playing travel ball right now.”

He plays for Triple Threat, based out of Charlotte County. The team is coached by Jeff Rapole and Mark Simon.

Walker expects they will probably play for the rest of the summer.

It is an exciting opportunity, but as he reflected on the lost 2020 season with the Eagles, Walker admitted there is something unique about playing high school baseball.

“We don’t really have one rival,” he said. “We’re kind of like rivals with everybody in the surrounding counties.”

Prince Edward Head Coach Tyler Cristo expected Walker to be a key force for the Eagles this year.

“He was a special player,” the coach said. “He had raw talent. Very strong, probably overall the strongest player we had on the team as far as just overall power. He could hit a ball a ton.”

Cristo said he and his staff were working with Walker on his mechanics and timing.

“He was making great strides,” Cristo said. “He did pull his hamstring right before our Appomattox scrimmage, so he sat out that day, but he was going to be ready to go the following week.”

The coach said in terms of overall arm strength, he would rank Walker as one of the best in the state at the Virginia High School League Class 2 level.

Because Walker’s arm strength could be so intimidating, Cristo said Walker was training to be a relief pitcher as well.

Walker noted how this has made him more versatile for his travel ball team.

“That’s a different tool I get to use now, because I used to pitch, but then I stopped and went straight to outfield,” he said. “And now I’m back getting into it.”

Walker has interest in playing college ball, if the opportunity arises.

“Yeah, if I get scouted by somebody,” he said. “I might try to walk on, depending on where I go to.”

For now, he continues, through travel ball, a playing career on the diamond that began whe

The tectonic plates of Longwood University athletics and NCAA Division I softball in the region shifted June 26 with Kathy... read more