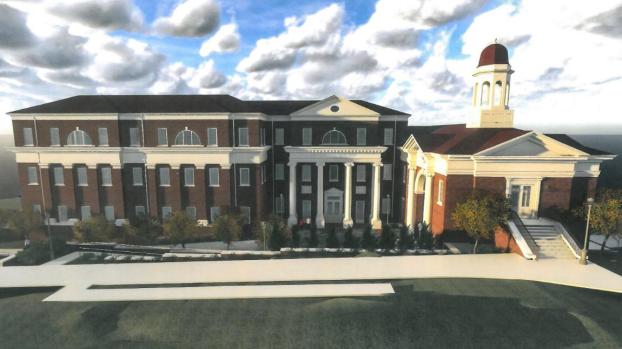 Pictured is a digital rendering of Allen Hall, a 43,000 sq. ft. academic building in the process of being constructed at Longwood University. The university announced Tuesday it would be naming the building after longtime Longwood professor Dr. Edna Allen Bledsoe Dean. (Photo courtesy of Longwood University)

Longwood University has announced it will name three campus buildings in the final stages of construction after local social justice and university heroes as well as making the move to refer to the campus’ previously-named Ruffner Hall as “the Rotunda.”

On Tuesday, June 30, Longwood officials announced they would be naming the university’s new 43,000 square foot academic building in the heart of campus in honor of Dr. Edna Allen Bledsoe Dean, Longwood’s first African-American tenured faculty member and a Longwood University professor of more than three decades with long generational ties to Farmville and Prince Edward County.

From her start at the university in 1980 until her 2004 retirement, Bledsoe Dean’s service at Longwood included positions such as the director of field services for the social work program, several university committees, coordinator for minority affairs and minority recruitment and a mentor to countless students.

According to the release, the formal name of the building will be Dr. Edna Allen Bledsoe Dean Hall. It will be referred to on campus as Allen Hall in order to recognize and honor both Bledsoe Dean and her family.

This past spring, according to the release, Dr. Beldsoe Dean received Longwood’s 2020 Honorary Alumni Award.

The university’s high-rise Curry and Frazer residence halls, which have received complete overhauls and renovations, are to be named in honor of Prince Edward civil rights figures Barbara Johns and Dr. Gordon Moss.

Moss was a Longwood faculty member and campus leader who worked to support civil rights in Prince Edward County in the face of Massive Resistance in the 1950s and 60s.

The original residence halls, the release noted, for 50 years bore the names of Jabez Curry and Robert Frazer.

According to the release, Curry played a significant role in advocacy and development of public education in Virginia and through the South. During the Civil War, he served in the Confederate Congress.

Frazer served as president for several years, beginning in the late 19th century, of the Female State Normal School, as Longwood was known at the time. He was also a Confederate soldier during his early adulthood.

The release also noted that Longwood President W Taylor Reveley IV announced to the campus community that the university’s Ruffner Hall would again be referred to simply as the Rotunda.

The building was called the Rotunda for decades during the first half of the 20th century until the state named the building Ruffner Hall in 1949 after William Ruffner, a slave owner who helped found the system of public education in the 1880s in Virginia on a segregated basis.

University officials said Longwood and the state will work together on official steps that may be necessary to change the building’s formal name. Longwood’s Bicentennial initiative, announced last spring as a campus history project, will also explore how to contextualize and examine Ruffner’s role.

In a Wednesday, June 24, guest column to The Herald, public historian and Farmville native Justin Reid posed the question of whether or not Longwood University would follow the actions of other state universities, such as University of Virginia, in renaming buildings that bear the namesakes of controversial historical figures such as Curry and Ruffner.

In his opinion piece, Reid emphasized his feelings that Bledsoe Dean would make a great candidate for the renaming of a university building.

“This symbolic, yet meaningful gesture signals Longwood is responsive and willing to evolve,” Reid said Tuesday evening shortly after the release. “The way we continue to honor Dr. Edna Allen Dean, Barbara Johns, Dr. Gordon Moss and others like them is by continuing to organize and advocate for positive change at Longwood and beyond.

“Our community has an important civil rights history, yet Longwood’s history department doesn’t employ a single Black faculty member,” Reid said. “There’s always more work to do. Renaming these buildings is a powerful step in the right direction. But it’s only one step.”

Reveley said the move signals a page has been turned in Longwood’s history.

“July 1 marks a New Year’s Day of sorts for the academic year ahead, and it is also an appropriate moment to turn a new page in our history,” Reveley said in the release. “Three important campus buildings are entering the final stages of completion and set to all be open with the start of the fall semester. At the same time, across the nation, there is a moment of reckoning and commitment that the names of our buildings fully reflect the values of our institutions, and of the people who live, learn and work in them every day.

“Longwood’s campus and buildings are essential to our mission and spirit. We should be proud of them in every regard, and at this moment of refreshment and regeneration, I hope these steps will make that possible.”

There will be no garbage pickup Friday, July 3 due to the July 4 holiday. The Town of Farmville Public... read more