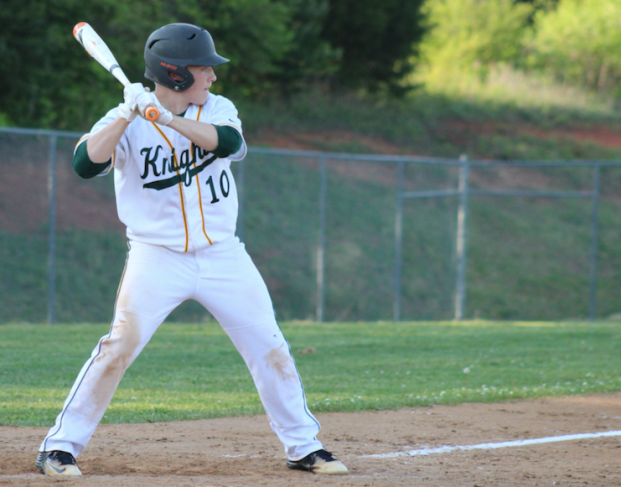 The tremendous impact Walter Edwards made on the gridiron for Buckingham County High School was parallel to the impact he made on the diamond. (Photo courtesy of Lyla Wood)

Everyone familiar with the high school football scene in the area knows the name Walter Edwards and associates him with excellence. He had a similar reputation on the diamond and was looking to cement that legacy this spring before the COVID-19 pandemic canceled his senior season.

Edwards had an outstanding 2019 baseball season, batting around .410 from the leadoff spot for Buckingham, earning second team all-district honors as a utility player and second team all-region accolades.

“With the district, I really felt like this year was going to be his year to kind of be a first-teamer and, if he had the season I expected him to, possibly make a run at Player of the Year honors,” Knights Varsity Baseball Head Coach Trey Lawson said.

Lawson noted he coached Edwards when he was a freshman on the junior varsity baseball team. Edwards was pulled up to varsity the last few games of that year, and then he was a full-time varsity player from his sophomore season on.

“Walter was kind of the same with baseball as he was with football,” the coach said. “He meant a lot to our program as far as being that guy that we could count on if we needed something to happen. He was our leadoff batter last year, and he was going to be our leadoff batter again because the kid just has amazing speed.

“And he’s just so smart when it comes to the game, kind of the same way he is in football, that when he gets on base, he knows how to make stuff happen, like he knows how to mess with a pitcher’s head,” the coach continued. “He doesn’t just stand there and wait. He’s going to put pressure on the defense every time he’s on the bags.”

“He would spend some time on third base, which was his primary position, but he also caught a lot for us too, and he was going to be spending a lot of time behind the plate this year since he was the only returner that I had that had spent some time back there,” the coach said. “He also played shortstop a few times for us. In the (2019) regional game against Dan River, he played a lot of shortstop in that game and made some really good plays just because of his quickness and his reaction and knowing the game so well.”

The coach noted Edwards was a quiet leader of the Knights.

“Walter’s not a big ‘rah rah’ guy,” Lawson said. “He’s not going to give the speech that gets everybody pumped up, but when he gets something going (on the diamond), it pumps everybody else up because they know that he’s getting ready to do something special.”

And they know this from long-standing experience. He played with many of his teammates for most of his life.

“Since the first year I could sign up, I’ve been playing,” he said, recalling T-ball, youth leagues and Dixie Youth Baseball.

The relationships with those he shared the diamond with back then have continued at Buckingham County High School.

Edwards shared what this spring has been like with no baseball and no school due to the novel coronavirus.

“It’s been hard not being able to see everybody you’ve seen every day of your life for however long, but I would have loved to play baseball this year and got to hopefully accomplish some goals with my team,” he said.

Friendship was central in Edwards’ answer to the question, “What did you miss most about baseball season this year?”

Edwards is interested in entering the workforce rather than going to college, and he confirmed the Knights’ 2020 season would have been his last chance to play organized baseball.

In terms of his future plans, he said he is just looking for a good job that is good for the future.

“I’m open to moving and doing work that involves traveling, but it’s just whichever opportunity comes up,” he said.