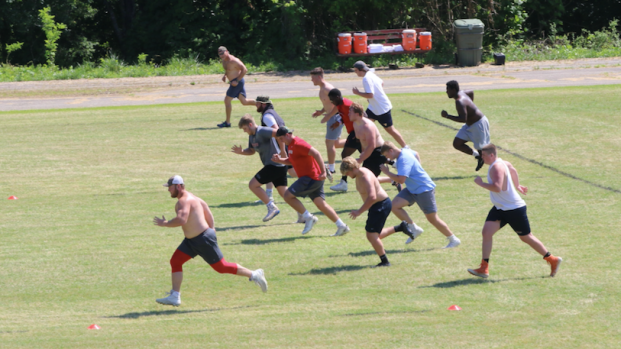 Virginia Military Institute (VMI) rising senior offensive lineman and former Fuqua School standout Brad Davis leads a group of fellow VMI football players in a practice session Friday afternoon, June 12, at Fuqua. At top, Davis’ father, Fuqua Assistant Head Coach Rick Davis, participates while supervising the session. “Because the whole COVID-19 thing, everything for everybody is player-led right now,” Coach Davis said, referring to practices. “Brad decided to see if he could get the o-line together, and so they spent the night over at one of the lodges over at Bear Creek (Lake) State Park both Friday and Saturday night. … And came in Friday afternoon and did a workout on the field. Then they went up and they were in the weight room for another hour and a half after that. They were in the classroom beforehand. We actually went to my classroom, and they did a bunch of board stuff and a bunch of film study stuff.” He said his son and the other VMI players were there for four or five hours Friday and a couple more Saturday, June 13. Brad Davis, who is preparing for his final season with the Keydets, has shined on the gridiron and also in the classroom. A mechanical engineering major, he was the player on the VMI football team with the highest GPA in the fall 2019 semester and also the spring 2020 semester.

Everyone familiar with the high school football scene in the area knows the name Walter Edwards and associates him with... read more