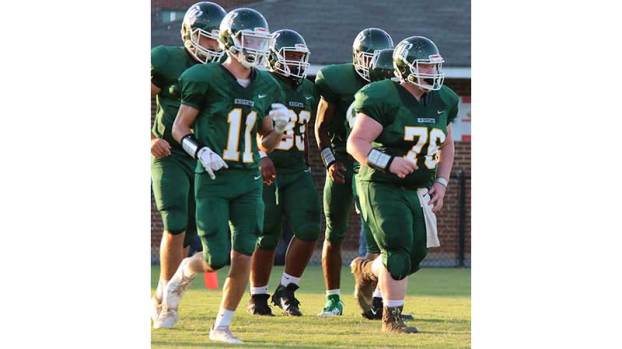 Buckingham County High School’s Nathan Brickhill, No. 11, and Garrett Hafley, No. 76, are two of 57 recruits joining the ranks of the Hampden-Sydney College football team. They are joined by two other area recruits — Elijah Warner, of Fuqua School, and Blake Barker, of Cumberland County High School. (Photo by Lyla Wood)

Hafley was a difference-maker on the line for the Knights, making the 2019 All-James River District First Team as a defensive lineman. Brickhill was a key presence in the secondary and made the all-district second team at defensive back. They helped the Knights complete their return to form last year, as the team finished 10-2, advancing as far as the regional semifinals.

Though the Dukes have struggled in recent years, Barker was a stalwart on the line during his high school career, helping facilitate the success in the trenches the program experienced.

Warner was a standout quarterback and defender for the Falcons, garnering all-state selections on defense, offense and special teams this past season, during which he led Fuqua to a 9-2 overall record. He helped lead the Falcons to berths in the Virginia Independent Schools Athletic Association Division III state championship game in 2017 and 2018.

Favret, who is the second-winningest coach in H-SC history with 131 victories in 20 seasons and a five-time Old Dominion Athletic Conference Coach of the Year, said in the release he feels he and his staff checked all the boxes with the class of 2024 — speed, size, playmakers and terrific student-athletes.

“There is no question that this influx of talent will help us right away,” he said in the release. “Kudos to my staff and the faculty/administrators that helped make this happen during this highly unusual recruiting season.”

The release included the complete list of incoming football recruits that is listed below. The list is alphabetical and includes players’ respective high schools.