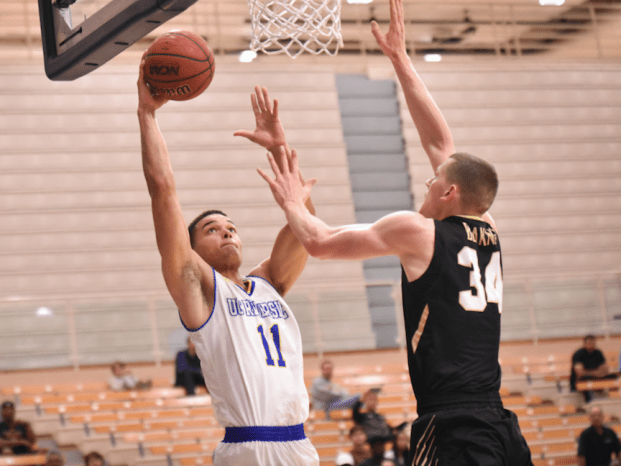 Veteran forward Zac Watson, seen here competing for UC Riverside, is transferring to play at Longwood University where he is expected to be an impact player. (Photo courtesy of UC Riverside)

Longwood University Men’s Basketball Head Coach Griff Aldrich has once again tapped into the Texas basketball pipeline, this time bringing in veteran forward Zac Watson as the fourth signee in his 2019-20 class.

A 6-foot-7-inch, 215-pound forward from Plano, Texas, Watson will transfer to Longwood after playing his first two seasons of Division I basketball at University of California, (UC) Riverside where he was a key contributor both as a starter and off the bench. Now a Lancer, he joins a Longwood program that last season earned a school-record fourth-place finish in the Big South Conference.

A decorated high school player from Texas powerhouse Liberty High School, Watson’s first two seasons at the collegiate level saw him average 4.6 points and 3.5 rebounds in 57 career games at UC Riverside. His defensive presence helped the Highlanders emerge as one of the nation’s top defensive teams in 2019-20, ranking eighth in the NCAA and atop the Big West Conference by holding opponents to 60.6 points per game.

“We are extremely excited to have Zac join the Lancer basketball family,” Aldrich said, who has led Longwood to its winningest two-year stretch in more than two decades.

“Zac is an outstanding player, an excellent student and a terrific young man. He exemplifies much of what we are seeking to establish with our culture and program.”

“Zac will bring a diverse skill set to our program and be capable of playing a variety of positions that will be very valuable,” Aldrich said. “He has played at the highest levels of (Amateur Athletic Union) basketball and for outstanding coaches at the high school and collegiate levels. We look forward to Zac making a big impact on our program.”

Aldrich and the Lancers got a first-hand look at Watson during the first month of the 2019-20 season when he contributed five points and five rebounds in 16 minutes off the bench to help the Highlanders overcome Longwood in the Collegiate Hoops Roadshow Nov. 26.

Watson’s performance in that game came during a sophomore season in which he shot 56.9% (29 of 51) from the floor and ranked fourth on the team with 9.93 rebounds per 40 minutes. Among his top performances that year was a 12-rebound, four-assist effort in UC Riverside’s season-opening road win at Power Five school University of Nebraska.

Watson was also a 22-game starter for the Highlanders as a freshman in 2018-19, logging six double-digit scoring games, 6.1 points and 4.0 rebounds per game during that season.

“Just from knowing Coach Aldrich and the staff for a little less than a month, I’ve gotten a good feel of the focused culture of Longwood,” Watson said, who was also committed to Ivy League member Dartmouth College in high school before signing with UC Riverside. “The program is on the rise, and I feel like I can jump in and contribute. I’m just grateful and excited for the opportunity.”

Watson’s success at UC Riverside followed a standout prep career in North Texas, where he was a two-sport athlete at Liberty High School, playing basketball and football. On the hardwood, he was a two-time all-district first-team honoree and the 2018 District Co-Defensive Player of the Year, and he capped his high school career by helping Liberty to a second district championship.

Also a 1,000-point scorer at Liberty, Watson finished his career ranked No. 2 on the program’s all-time scoring list following a senior season in which he averaged 16 points and eight rebounds per game.

Off the court, Watson will major in business administration at Longwood and aims to pursue a career in the sports or entertainment industry after the conclusion of his playing career.

Munoz, Wade and Wilson all averaged at least 18 minutes per game in 2019-20, with Munoz leading the team in scoring, Wade starting 22 games and Wilson emerging as one of the top bench scorers in the Big South.

Along with those four juniors, Longwood also returns impact freshmen Heru Bligen, who averaged 13 minutes per game, and Leslie Nkereuwem, who appeared in all 32 contests and led the team in dunks.

Long after the last basket of the 2019-20 season for Longwood, freshman guard Kyla McMakin continues to accumulate awards and... read more