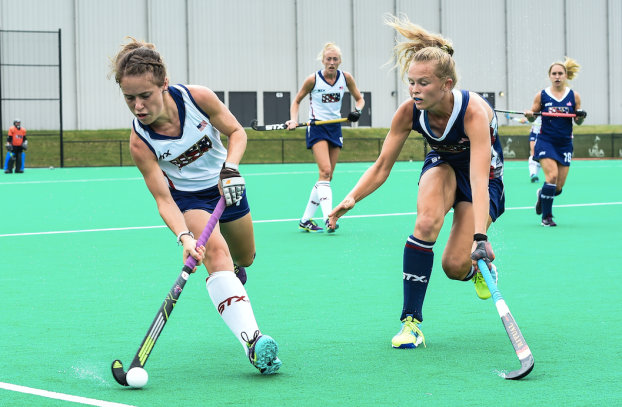 For as long as she can remember, it has been Longwood assistant field hockey coach Meg Miller’s dream to play for the USA Field Hockey program.

That determination and goal led Miller to extraordinary heights in her field hockey career, and the midfielder has yet to reach her peak. A star starting at a young age, she has accomplished countless accolades as a player and a coach while overcoming a major knee injury to come back stronger.

Now, having earned spots first on the USA Field Hockey U-21 team and then the developmental squad, she will have the opportunity to take that dream further when she rejoins Team USA to compete with the developmental team in 2020.

“It has been a goal of mine since I was very little, to be on the national team, so the whole process has been cool to be a part of and work towards something,” Miller said.

After a standout high school career at Palmyra Area in Pennsylvania where she led her squad to a pair of District III Championships and earned all-state, first-team honors, Miller took her talents to the University of Richmond, where she wasted no time making an impact for the Spiders.

As a freshman, Miller was named to the A10 All-Championship Squad as she helped lead her team to the A10 Championship and an automatic berth in the NCAA tournament. In her sophomore season, where she started all 21 games for Richmond and was named to the Atlantic 10 Second Team, she was noticed by the head coach of the USA Field Hockey U-21 national team, her first introduction to the national level of field hockey.

“We played at the University of Virginia, and the head coach of the U-21 team, Janneke Schopman, was there and happened to watch our game,” Miller explained. “That was where the connection started.”

Schopman was so impressed by Miller that she was invited directly to try out for the U-21 team at the conclusion of the 2015 season. So after the end of Richmond’s season, Miller prepared for her first audition with the U-21 team.

“It was right after Thanksgiving, and I was very, very nervous — on the day that you are supposed to eat a lot of good food I couldn’t eat anything,” Miller laughed. “I tried out then at a camp, and I made the team.”

That was the first big step for Miller, who had dreamed about the opportunity to play international field hockey for the United States since she could first pick up a stick.

“When I first got invited, it was surreal, like is this really happening?” she recalled.

A newly-minted member of the U-21 squad, Miller quickly got the opportunity to make her international competition debut, as the spring of 2016 brought the Junior Pan Am Games in Trinidad and Tobago — the only thing left to do was get clearance from her professors, as the March 31-April 9 timeline overlapped with the end of the spring semester at Richmond.

“It was interesting to get approval for it,” Miller remembered. “Obviously my coaches knew what was happening and they were happy to help with the whole process, but I had to get permission from the dean, and she was very supportive during the whole process. I missed a bunch of school, but my professors were very supportive and flexible — I took a few exams down in Trinidad so that was interesting.”

With clearance from the school, Miller headed to Tacarigua, Trinidad and Tobago with the U-21 team for an experience she will never forget.

“The bigger events were really cool to be a part of and take a step back and look at everything as a whole,” Miller said. “For example, going down to play in Trinidad was awesome — it feels so along ago yet I can remember everything about it. There are definitely some great memories to hold on to.”

After downing Barbados and Chile in the elimination round to reach the final, they finished with a loss to powerhouse Argentina in a second-place showing, something Miller and her team were proud to accomplish.

“We finished overall second, which was really cool,” Miller said. “In the games leading up to the final, I was still very new to the international style of play and was still getting used to the team overall. We had the test series in January, but besides that everything was based off camps, so it was kind of hard to get adjusted, especially being in the middle of our spring season back in Richmond. It was difficult to adjust to the different styles of play and teammates. I got a decent amount of playing time in the games, and it was definitely a good experience.”

At the start of her junior season at Richmond in 2016, Miller had to figure out what was next for her international career as she drew close to aging out of the U-21 team.

“When I turned 21, there was a new team in the works, which was the developmental team,” Miller said. “It was made for people like myself who were aging out of the U-21 team but were not quite ready to play for the national team.”

This new team served as a bridge between the U21 team and the national team, helping ease the transition of younger players to the biggest stage while continuing to develop and maintain the pipeline to the international team. In January of 2017, Miller was invited to try out for this new team.

“I tried out for the development team in 2017 and made it,” Miller said.

At the starting point of this new team, USA field hockey was still determining the structure and competition for the development team.

“We had different camps at different locations about once a month,” she explained. “Generally, the camps were three or four days over a weekend where we would get together at training locations and have two to three training sessions a day depending on what we had upcoming to work out the kinks for, or if it was just to continue to progress. We would do some team bonding stuff. We would also continue to train our stick skills, conditioning, etc. and then pick up where we left off the next time.”

As a member of the newly-founded developmental team, Miller met with the team throughout 2017, leading to her senior season at Richmond. A preseason All-Atlantic 10 pick and a team captain, Miller tied for the team lead with seven assists while earning NFCHA All- South Region Second Team honors. However, after starting the first 16 games for the Spiders, Miller suffered a setback.

“Right around two weeks left in our season, I suffered an ACL injury, costing me three regular season games and the tournament,” remembered Miller. The timing and severity of the injury put her immediate future with the team in jeopardy, as she was forced to miss time.

“Tryouts for the developmental team were in January of 2018, and I was just a month out of surgery, so I took a few steps back from the team just to be able to rehab,” Miller said. “As soon as the injury happened, I was in contact with my coach to let her know what had happened, and she was very supportive, and that whenever I was able to do things again, they would help me get back to point where I could do some hockey-related stuff. So I took some time off to recover.”

After graduating from Richmond in the spring of 2018, Miller joined head coach Iain Byers’ staff at Longwood as an assistant coach for Lancers field hockey. The team went 9-7 overall and a program-best 4-2 in Mid-American Conference play in the first year of her tenure, as she helped lead four players to All-MAC honors. But even as she enjoyed that success from Longwood’s bench, she still had her sights set on a return to USA Field Hockey in 2019.

“Right before I came home for Christmas break in 2018, I went out to the field and practiced and did drills I could do by myself to get back in the swing of things,” Miller said. “It was tough at first because I had been out of playing for about a year, so that was very difficult. Thankfully, with scrimmages and practice and everything, I was able to get back into game shape and playing in general while getting my head wrapped around the playing side of hockey as opposed to the coaching side.”

Despite the long layoff, Miller did not miss a beat, as she earned back her spot on the developmental team in January of 2019. She spent the ensuing summer practicing and competing with her team and other high performance field hockey players, continuing to grow as a player while coaching Longwood field hockey to new heights.

Miller said her experience with Team USA as a large factor in her success as a coach, while her new role on the sidelines has also made her a better player.

“This is something I think about a lot,” Miller said regarding how coaching has made her a better player and vice versa.

“It helps from both angles to give you a different perspective on the game. Going from a player to a coach, you learn new things. If I learned something that helped me as a player, I can further use that to help someone on our team who might be struggling with the same skill. It helps to grow my own personal knowledge of the game — it has helped me with some of the more structural things like presses and outlets that I didn’t think as much about as a player.”

The results have shown on both frontiers — in the 2019 season, Longwood set a program-best with six All- MAC nods, while earning the team’s first ever MAC Tournament victory in a 3-0 win over Ball State. In January of 2020, Miller solidified her spot on the developmental team in another tryout, continuing to work towards her life-long goal. With five of her teammates having made the jump from the development team to the national team, she knows it is within reach.

“It is definitely cool to see them go through it and get motivation for it,” said Miller of her former teammates who have made the jump to the national team.

While the outlook of the 2020 development team remains on hold given the current global climate, Miller remains game ready, while prepping Longwood for a run at a MAC championship in 2020. One constant she is thankful for is the Longwood coaching staff of Iain Byers, Laura Malinoski, and Annie Zinkavich, who have helped her every step of the way.

“They just keep me going and motivate me, whether they realize it or not,” said Miller of her colleagues on the coaching staff. “It is good to be able to keep talking through things. Every time I have a try out or something I get texts from them — they are just as happy for me going through this process as I am, and it is definitely awesome to have that support system. I am very thankful to have them to go through it with me.”

The Big South Conference provided some insight into how COVID-19 will impact the 2020-21 sports season for Longwood University and... read more