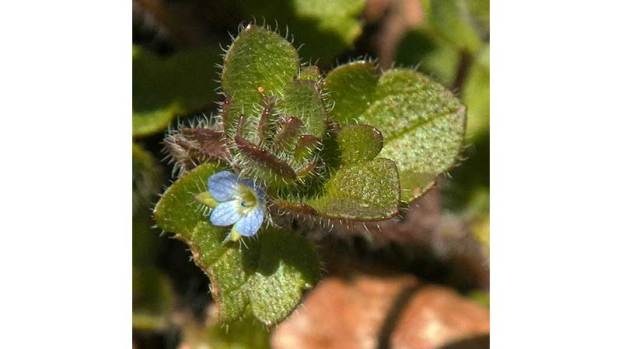 Even weeds are beautiful. (Photo by Dr. Cynthia Wood)

Hiking in late winter or very early spring requires an open mind about the plants that can be found.

Sure, there are always Christmas ferns, mosses, lichens, and liverworts, but flowering plants? Not so much.

My approach is to concentrate on the stillness and to enjoy small finds on the forest floor.

This year the skunk cabbages appeared in late December and were already producing leaves by mid-February. The hepatica and cutleaf toothwort hadn’t emerged, so I wasn’t expecting much when I set off on an early afternoon hike last week in Lunenburg County.

Almost immediately, however, I found a creeping plant with tiny bluish purple flowers. It was ivy leaf speedwell (Veronica Hederaefolia), a non-native annual that reseeds prolifically and invades my flower beds every year. It’s a nuisance, but when there’s nothing else around, well, it’s beautiful in its own way. The leaves look like very hairy mittens, the stems are reddish green, and the little flowers have very thin stripes of dark blue on the petals that help make them stand out in a sea of green.

The Latin name Veronica refers to St. Veronica who is said to have wiped the blood from the face of Jesus on the way to Calvary.

Ever afterwards, her handkerchief bore the vera iconica or true likeness of his features. No one seems to be quite certain how this plant got its common name, speedwell. It may refer to the plant’s rapid growth, as speedwell is an old term meaning to thrive.

It may refer to its ability to cure many ailments, or to its use in traditional tussie mussies, which were given out with the greeting, “Speedwell!”

In traditional folk medicine, ivy leaf speedwell is used to brew calming teas, to treat inflammation and sore muscles, and to soothe asthma and other breathing problems.

Yes, ivy leaf speedwell is an introduced weed, but at the end of winter when the world is still mostly painted in muted shades of gray and brown, it’s a lovely little surprise. There will be plenty of time later this year to complain about it taking over the lawn and flower beds. In the meantime, enjoy it.

Dr. Cynthia Wood is a master gardener, who writes two columns for The Herald. She can be reached at cynthia.crewe23930@gmail.com.

Hiking can be a voyage of discovery

Spending time outside, whether gardening or hiking, is just plain good for you. Hiking and walking have been called moving... read more