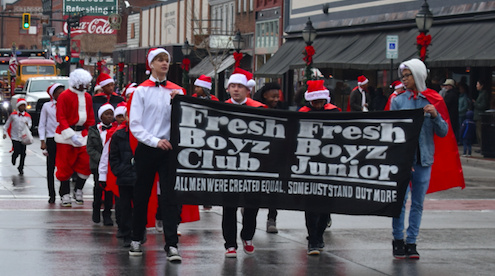 Grand Marshalls of the parade, The Fresh Boyz Club of Farmville, live up to their banner statement “All men were created equal. Some just stand out more.”

Clouds and drizzle were no match for the Spirit of Christmas in downtown Farmville Sunday as onlookers lined the streets dressed out in coats, boots and in many cases hot coffee or cocoa in hand to fight off the chill of the day and enjoy the 2019 Farmville Jaycees “A Superhero Christmas” Parade.

Starting the parade line up was the Town of Farmville Police Chief A.Q. “Andy” Ellington. As his car turned the corner on to Main Street the crowd drew close and smiles lit up the faces of children, young and old.

The host and Master of Ceremonies for this year’s parade was Kirk Pressley, also known by youthful fans as “MC Boom Boom Balenciaga.” Sponsors of the parade were Tony Markland of ALCOVA and Southside Electric Cooperative.

Bringing up the rear of the parade was superhero for children everywhere — Santa and his beautiful bride Mrs. Claus.

To see more photos of the parade click here.

The Church and Community Events calendar is published each Friday. Items must be submitted by 10 a.m. Monday for that... read more