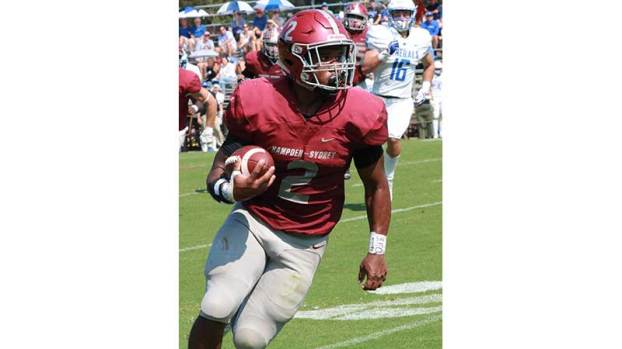 Hampden-Sydney College’s (H-SC) football team is looking to kick-start a turnaround to its 2019 season this weekend in its homecoming game by upending undefeated Bridgewater College.

The Tigers are 1-4 overall and 0-3 in the Old Dominion Athletic Conference (ODAC). They are on a three-game losing streak and are fresh off a 56-17 ODAC road loss to Emory & Henry College, but they have historically had notable success against Bridgewater.

A Hampden-Sydney Athletics press release noted that the Tigers and Bridgewater meet for the 76th time on the gridiron when the two teams play on Saturday afternoon on Fulton Field at Lewis C. Everett Stadium. The Tigers lead the overall series against the Eagles, 60-15, including a 42-21 road win last season. H-SC and Bridgewater first met on the gridiron in 1929.

The Eagles enter this game with an overall record of 4-0, including a 2-0 mark in the ODAC.

H-SC Head Coach Marty Favret said this game kind of reminds him of the old days when Bridgewater was a perennial powerhouse.

“They’ve got a good team this year, and they’re playing very well, and it’s going to be a tall task,” he said. “They’re balanced on both sides of the ball, playing good defensively, they’re playing really well on offense, so we’ll bring our slingshots out. We’ve had a good week, and we have a good plan, and I know it’s going to be a great crowd, so we’re happy to be back home, but we’re a little banged up right now and just trying to find a way to get out there and keep this game close and hopefully find a way to win it in the end.”

The coach stated that the Eagles, who are fresh off a bye week, base their offense on the run and spread the ball around to a variety of receivers in the air when they pass.

“They’re very good with (what) they’re doing, they’re very creative on offense, and they’ve got a fifth-year quarterback that’s playing well for them, but we’ve had success against them here at home, and I hope it continues,” Favret said.

Bridgewater is led by redshirt senior quarterback Jay Scroggins, who has passed for 835 yards and 10 touchdowns in four games, the release cited. Junior running back Demetreus Jalepes has rushed for 385 yards on 60 carries with four touchdowns. Senior wide receiver Trey Stephens has 10 receptions for 182 yards and three touchdowns.

Meanwhile, Hampden-Sydney is led by senior quarterback Clay Vick, who has passed for an ODAC-best 1,349 yards in five games, officials highlighted in the release.

He has thrown six touchdowns but also struggled with 14 interceptions.

His favorite targets out wide have been senior wide receiver and All-America candidate Major Morgan, who has an ODAC-best 37 receptions, gaining 495 yards, the release noted. Junior wide receiver Blake Page has 22 catches for 241 yards. Sophomore running back Kaleb Smith has rushed for 302 yards on 73 carries with two touchdowns and adds 27 catches for 272 yards.

Officials stated in the release that on defense, senior linebacker Griffin Davis has 41 tackles to lead the Tigers, and junior linebacker Brendan Weinberg has 37 tackles.

Favret pinpointed a facet of the offense that he thinks needs to play a prominent role Saturday for the Tigers to be successful.

“We need to make big plays, and that’s something that’s been lacking recently,” he said. “We certainly need to get Major back on track. He only had two catches last week, which is a career low, probably, so we just need to sort of click in that area. We’re working hard to get that done.”

The release concluded by noting that it is Homecoming Weekend on the Hill and at halftime on Saturday, representatives from the 1982 and 1983 ODAC Championship football teams will gather at midfield to receive their championship rings. The 1982 Tigers finished 4-1 in the ODAC and featured five First Team All-ODAC honorees, including ODAC Player of the Year Hiter Harris, along with David Allen, Doug Parsons, Phil Suazo and Frank Wheeler.

The 1983 Tigers finished 5-1 in the ODAC and also featured five First Team All-ODAC honorees, including David Allen, Brad Cary, Doug Parsons, Gus Paulette and Phil Suazo, the release continued. Both teams were coached by the late J. Stokeley Fulton, who earned ODAC Coach of the Year honors each season.