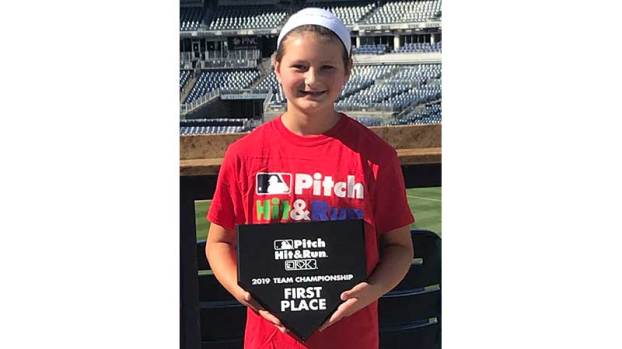 Womack shines in official skills event of the MLB

Kelly Womack, of Cumberland,  participated in this year’s Major League Baseball (MLB) Pitch, Hit & Run contest, advancing as far as the Team Championships in which she placed first in her age group.

Her journey began April 28 at Locals level in Farmville, which was sponsored by Bandits Sport Center. She had to participate in three different categories. She needed to hit a target from 35 feet with six balls. She needed to hit three balls from a batting tee where the distance was measured where the ball first hit the ground. Lastly, she was timed running 180 feet from second base to home plate.

She won first place and progressed from Locals to participate in Sectionals, which took place at Tuckahoe Little League Park on May 4.

Womack’s scores were strong enough to capture first place, and then her scores were compared against other Sectionals winners across the state to earn her a spot as one of the top three individuals from the Washington Nationals baseball team coverage area of Virginia, Maryland and Delaware.

On June 23, Womack traveled to Washington, D.C., to compete in the Team Championships held in the Washington Nationals’ stadium. She did extremely well in all three categories and won first place in her age group.

There were a total of 36 boys and girls participating  in four different age groups. The first-place winners were led out onto the field and were recognized in the pregame ceremonies later that afternoon.

From there, Womack’s scores were compared to the results generated by competitors at 30 other MLB ballparks with the best scores winning one of the three spots to receive an expense paid trip to the MLB All-Star Game in Cleveland, Ohio.

Unfortunately, Womack did not place well enough to win a trip to the All-Star game, but she had a highly successful bid to reach that point.

When asked what she thought of her experience, Womack said that “it was astonishing and amazing!”

She noted that she could not believe that she had been able to do so well in a contest that she really had never thought about being in. It also gave her a chance to be in Washington, D.C., for the first time and in a major league ballpark.

She said she really enjoyed her experience spending her day there.

Womack received two free tickets to watch the Washington Nationals game that afternoon as a result of her participation in the MLB Pitch, Hit & Run event at the ballpark. However, she was unable to stay and watch the game because she had to return to South Hill to continue playing for the Prince Edward-Farmville Youth Association Angels all-star team.

She wanted to give a special “thank you” to the owners of Bandits Sports Center, Bart and Barbie Gray, for recognizing her abilities and encouraging her to enter the MLB Pitch, Hit & Run contest. She said she really appreciated all the support that they gave her as she completed each level of the contest.

Womack is the daughter of Robert and Lacie Womack, of Cumberland.