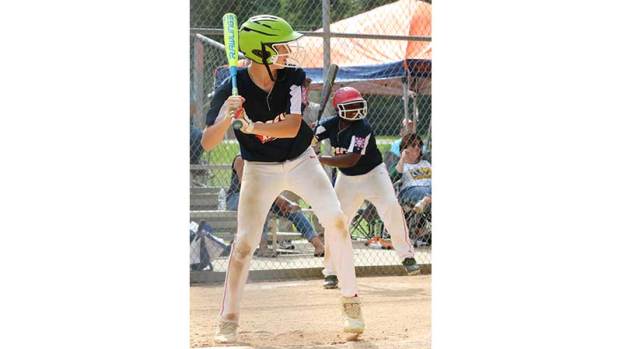 PEFYA Majors All-Star Harold Landis, pictured in foreground from earlier this summer, will bat for his team at the 2019 Dixie Youth Baseball Division 1 Major League World Series in Louisiana despite having a hard cast on one arm. Clevante Watkins, in background, will fill in for him on defense at shortstop. (Photo by Titus Mohler)

The Prince Edward-Farmville Youth Association (PEFYA) Majors all-star team will begin its representation of Virginia in the 2019 Dixie Youth Baseball Division 1 Major League World Series on Saturday against the Louisiana all-star team, and PEFYA is expecting contributions from all 12 players, which health will apparently allow.

PEFYA star Harold Landis injured his elbow while pitching in a victory during the state tourney, and while he will not be able to pitch during the World Series, Manager Mark Simon reported with astonishment that he will be able to bat.

“He has a (hard) cast that goes from halfway up his forearm to halfway up his bicep, so it covers all the way across his entire elbow,” Simon said. “… He swings as far as he can go until the cast restricts him, and then he just lets go and finishes with his left hand and is just absolutely smoking the ball. … If I wouldn’t have seen it, I wouldn’t have believed it.”

Noah Boehmer is expected to start on the mound Saturday.

Josh Simon has been training hard on the mound, the manager said, indicating that his son will be a key contributor there.

M.J. Holman, Jack Jones and Khris Ligon will be key in the outfield.

“The defense is looking good,” Manager Simon said. “Even though we lost Harold at shortstop, Clevante Watkins is a great next option, next man up. … I have no doubt that he’s going to get the job done whenever it calls for it down there.”

PEFYA’s game Saturday will be played at 4:30 p.m. Eastern Standard Time and will be broadcast on radio station WVHL Kickin’ Country 92.9 FM and potentially the JockJive Sports channel on YouTube.com.