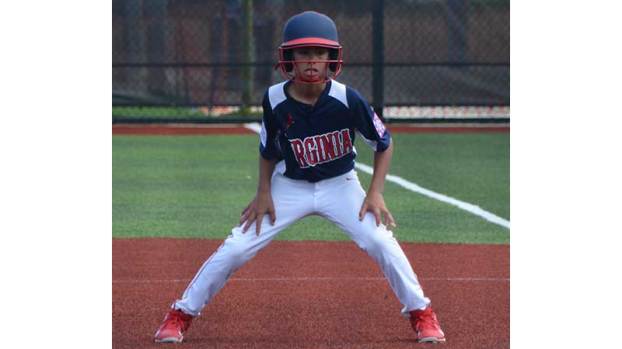 PEFYA Majors All-Star Jack Jones is poised to steal a base if the opportunity presents itself during the 2019 Dixie Youth Baseball Division 1 Major League World Series in Ruston, Louisiana, over the weekend. (Photo by Erin Jones)

The day prior, the Prince Edward-Farmville boys opened their World Series run in a showdown with Louisiana, which took a 2-0 lead after one inning and an 8-0 advantage after two.

Then PEFYA responded, scoring two runs in the third, but Louisiana replied with four more in the top of the fourth. Prince Edward-Farmville added two more in the bottom of the fourth, but that was all, as Louisiana went on to win 15-4.

Despite the loss, Barrett Motter created a notable highlight for PEFYA by hitting a two-run homer.

Most of the PEFYA team is the same one that attended the World Series two years ago at the Minors level.

Keontay Booker and Johnny Luhn moved out of the area after the 2017 campaign, but the two new players this year were outstanding additions, key to making the latest run possible — Khristian Ligon and Motter.

Despite going 0-2 in the 2019 double-elimination World Series event, the PEFYA Majors had an outstanding summer that included them earning the District 5 championship and the Division 1 state championship, finishing with an 8-5 overall record this summer.

To win the Division 1 state title, the PEFYA Majors had to take on the only remaining undefeated team in the state tournament, the Prince George all-star squad, and beat it twice. They did it, wining the second time without injured Harold Landis.

PEFYA Majors Manager Mark Simon said that after the victory, he praised his players for their incredible resilience, which has now been demonstrated across multiple years.

“I said, ‘That’s going to make you guys successful men when you get older and you become adults, whether you’re having a family, having a career,’” he said. “I said, ‘Being able to perform and being able to step up when things don’t go your way and when your backs are against the wall, it’s a great quality to have,’ and every single one of them has it.”

Payne set to play for Ferrum

Prince Edward County High School football star Rah’Quan Payne, who graduated in May, is hard at work preparing for his... read more