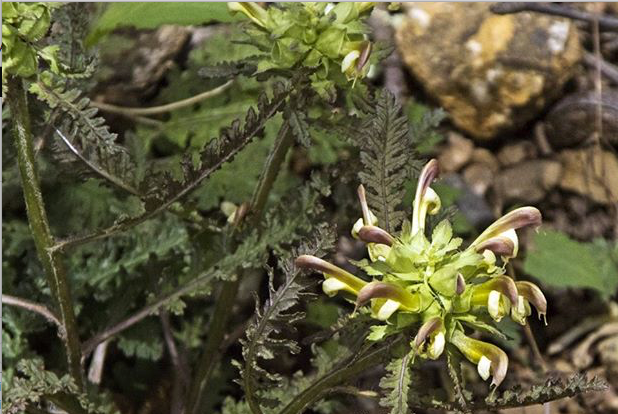 CYNTHIA WOOD | HERALD Wood betony is a hemiparasite capable of altering the mix of surrounding plants.

There are some native plants that I just can’t keep straight in my head unless I see the leaves and the flowers together. Wood betony, also called lousewort, (Pedicularis canadensis) is one of those plants. It’s a joke among my regular hiking buddies. They point out the leaves of this plant and then chuckle when I mumble. They know; they’re torturing me.

There’s a good bit of wood betony at Bear Creek Lake State Park and in the woods surrounding Trillium House at Wintergreen. It’s not hard to find. Wood betony is a relatively small native perennial that grows no more than a foot tall. The fuzzy leaves are deeply cut and almost fern-like in appearance; they form a dense basal rosette. Although the leaves are usually light to medium green, they can also be tinged with deep purplish red.

The hooded flowers are usually yellow, but can vary in color from solid yellow to yellow and pinkish red bicolor to a deep reddish brown. They are arranged at the top of a stalk where they open from the bottom of the stalk to the top. The leafy bracts are lobed, toothed and twisted so that the flowers are turned sideways. If you look straight down at the top of the flower spike, it looks like a pinwheel. The flowers are especially attractive to bees, including bumblebees, a characteristic that often helps neighboring colonies of mayapples, which don’t produce nectar, but rely on bumblebees for cross pollination. According to studies by Terence Laverty, when there are wood betony plants nearby, mayapples have a fourfold increase in visits by bumblebees, thus resulting in higher rates of seed set and fruit set.

Wood betony is a hemiparasite; it can conduct photosynthesis, but it also has the ability to draw nutrients from at least 80 species of surrounding plants, including asters, oaks, tall grasses, Trillium grandiflorum, common yarrow and staghorn sumac. There is speculation that wood betony may derive alkaloids from its hosts and that these alkaloids are then used to suppress the growth of some surrounding tall grass species.

Native Americans used wood betony leaves to make a stew. They also used it to fatten their horses and as a love potion.

The common name wood betony comes from an old belief about similar plants in Europe that were supposed to infect grazing cattle with lice. Not a pleasant characterization of an interesting plant.

If you find wood betony, I hope you’ll have better luck than I do in recognizing it.

CYNTHIA WOOD is a master gardener who writes two columns for The Herald. Her email address is cynthia.crewe23930@gmail.com.

Wildflower people are both incredibly generous and seriously obsessive. This spring I’ve been the recipient of untold generosity. It’s common... read more