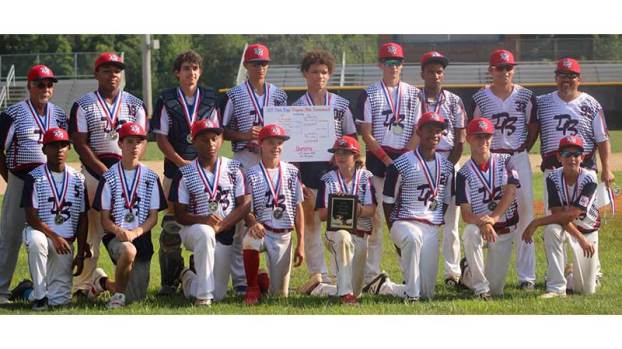 The Charlotte County 15U baseball team, which featured several players and a coach from Prince Edward County, used outstanding defense and strong pitching to go undefeated in the recent 2019 Dixie Boys 15U State Tournament.

The squad is significantly different from the Charlotte 15U team that ended up attending the 15U World Series because most of the boys on the state title-winning team opted to instead compete in the Pre-Majors state tourney, which is part of an older age level of Dixie play.

Additionally, the 15U World Series is an invitational, not a win-to-play event, which means a largely new Charlotte team would be permitted to compete in it, and state-level participation is not even a requirement.

The team that won the 15U state title this year, however, was further developing its remarkable record of success in the age division.

“They’re a really good group of kids,” Charlotte 15U Manager Jeff Rapole said. “It’s the second year in a row we’ve won that tournament, and honestly, it’s probably the best defensive team I think I’ve ever had.”

Charlotte was a dominant force during the state event.

“We had a couple games that were close, but nothing tremendous,” Rapole said.

In its first game, Charlotte defeated Amelia 15-4. Then the boys topped Cana 13-1 and beat Amelia again, this time 12-1.

Rapole noted that the teams reaching the final four of the tourney, in addition to Charlotte, included Buckingham, Bedford Metro and Madison Heights.

His team won 12-8 against Madison Heights.

Reed’s remarkably efficient performance was the highlight of a string of strong showings on the mound by Charlotte pitchers.

“I took two 14-year-olds up with me into the 15U (level), one of which was Colton Pillow, and the other one was Luke Skelton,” Rapole said.

“Dylan Kitchen was behind the plate the whole weekend, pretty much, for me,” Rapole said.

On offense, a key standout for Charlotte included Brandin Henson, who hit a grand slam.

Rapole also made a point to praise one of his coaches who was actually a player on his Pre-Majors team — 16-year-old Wade Jenkins.

“He was a huge asset to us for the team,” Rapole said. “He coached third base for me, made a lot of good decisions. Him and Jerry Pillow coached the bases for me. But I see a lot of things in the future out of that young man. I honestly think he might be our next year’s all-star coach. … Wade did a great job. A young man that’s willing to give to the kids, it’s important.”