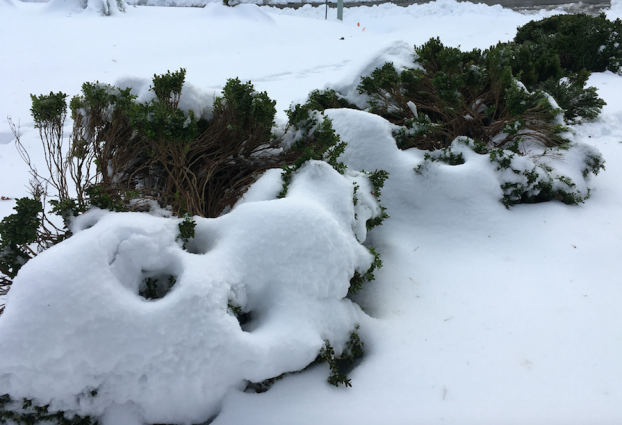 There’s no hope that these mangled boxwood will ever recover.

January is usually all about reading seed catalogs by a roaring fire and making endless wish lists of new exotic plants that I absolutely must have. It’s all about tracking the latest trends and colors and gardening practices. It’s about dreaming of fantastical new garden vistas and unlimited resources to create them.

This year, however, is different. It’s about reality and the loss of continuity. In late fall and then again not long before Christmas, we had two major storms. The first one brought howling wind and torrential rain that destroyed the road just beyond the entrance to our farm and flooded the lowlands. The second storm dumped a foot of snow and then topped it with a crusty layer of ice. In both cases, there was major damage to large old boxwood and a new mixed evergreen hedge.

The wind and rain of the first storm partially uprooted the 10 feet tall bushes in the new hedge and broke many of the branches. With some help, I managed to get all of them upright and firmly tamped back into the ground. They were looking all right and then the snow and ice arrived. More damage. The poor, long suffering bushes are bent double and, of course, there’s more damage. They look like the victims of a massacre.

And then there are the boxwood. There’s more than just wasted time and money involved with them. In Virginia, boxwood are special. They’ve been used to define boundaries in gardens since colonial times. In fact, Charles Gillette’s extremely popular and influential Virginia landscaping style was based on the extensive use of boxwood. Yes, there are people who hate boxwood. I even had visitors tell me several years ago that they wished all boxwood, including mine, would die. I’m thinking about those words a lot right now. You see, in the Old South, one didn’t buy boxwood. One took clippings from those belonging to great grandma, rooted them, and used them to anchor a new garden.

My damaged boxwood were grown by my grandparents and given to my aunt when she built the farm house. They represent gardening continuity from the mid-1800s until now. The boxwood survived the wind and rain of the first storm, but they didn’t survive repeated attacks by strangers refusing to heed the road closed sign and then realizing that they needed a place to turn around. The damage is hard to forgive because backing into the driveway and then pulling out isn’t difficult. About half of the boxwood have been badly mangled and there are deep tire tracks all-around them. They look sad and scraggly. Unlike the evergreens in the hedge, there really isn’t a chance that they’ll ever look all right.

And so, I’ll grieve and moan and groan, but I already know what I have to do. I’ll patch up the evergreens in the mixed hedge, gambling that once everything grows together in another year or so that it will all look fine. The boxwood are another matter. I’ll have to remove them and start over. Unfortunately, I’ve reached the age where I’ll never see them become as large and lush as the damaged ones. This year I’ll take cuttings and start the process of rooting them. If the new plants are looking all right in another year, then I’ll take a deep breath and remove the old ones.

CYNTHIA WOOD can be reached at cynthia.crewe23930@gmail.com.

Procrastination and the shortest day of the year

It’s early December and the shortest day of the year is upon us. The air is frosty before dawn and... read more