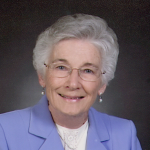 She was born in Seviereville, Tennessee, to the late P. L. and Viola Huskey Clabo. She was married to her loving husband of 60 years, Francis Eugene Wood, who preceded her in death in 2009.

Mrs. Wood was employed by Longwood College for a number of years. She was an avid gardener and an honorary member of the Buckingham-Dillwyn Garden Club. She and her husband, Gene, were known for their award-winning roses and brightened many lives with floral arrangements that Mrs. Wood delivered to the sick and shut-ins.

She was active in her church community and was a long-time volunteer of Centra Southside Community Hospital and a member of the hospital auxiliary.

Edna and her husband were active members of the Southside Squares dance club. She was devoted to her family and spent many happy hours with her grandchildren.

She is survived by a daughter, Sandra Parker, (Baker) of Suffolk, two sons, Francis, (Chris) of Farmville, and Dwight (Lisa) of Powhatan, four grandchildren, Camden and Daniel of Farmville and Morgan and Cassidy of Powhatan, three step-grandchildren and four step-great grandchildren. Preceding her in death were four brothers and three sisters. She is survived by a sister, Louise Mottley of Fishersville and a brother, Howard Clabough of Appomattox and many nieces and nephews.

A funeral service was held on Sunday, July 29th, at Puckett Funeral Home in Farmville. Mrs. Wood was then laid to rest beside her husband at Concord Baptist Church Cemetery, Sheppards.

Floyd Elliott Williams, 73, of Appomattox, passed away, Saturday, July 28, 2018 at his residence. He was the loving husband... read more