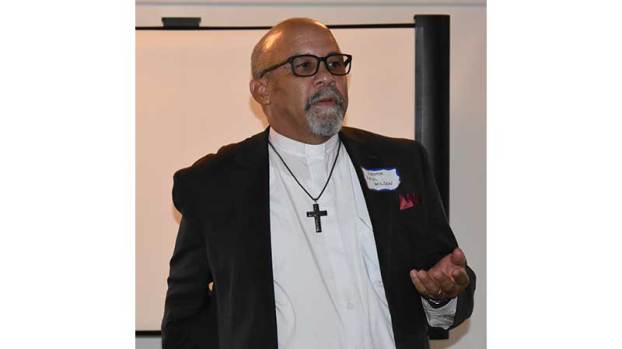 Paul Wilson, pastor of Union Hill and Union Grove Baptist Churches in Buckingham, spoke about the need for people in the area to lead the conversation about the Atlantic Coast Pipeline’s impact. (Photo by Emily Hollingsworth)

A community of people worried about the historical, environmental and health impacts of the Atlantic Coast Pipeline’s (ACP) compressor station off Route 56 in Buckingham County invited the public to take a tour of the area, and learn about the people who the station could most affect.

The tour and presentation, which took place Tuesday, was organized by a collection of community leaders and state representatives who contend that the pipeline’s location will damage a historical area of the county, the Union Hill community, and pose health and environmental issues for the people who live near it.

The tour began at Union Hill Baptist Church on Route 663, which is located in the area where the 53,783-horsepower gas-fired compressor station for the Atlantic Coast Pipeline is under construction.

The ACP is a 42-inch natural gas pipeline spanning Buckingham and parts of Cumberland and Prince Edward, and it also involves a section along Route 56 in Buckingham.

The pipeline off Route 56 will intersect with existing pipeline Transco.

Organizers and participants stepped into a van or drove separately to tour the triangular stretch of land that makes up Union Hill Road, Woods Corner and South James River Road. The tour allowed participants to see the homes in the area and the construction site of the compressor station’s close proximity to it.

The compressor station would be located within a 1 mile radius of 99 households, 85 percent of whom are African-American, a release from the event noted. One-third of people who live in the area off Route 56 are descendants of freedmen once enslaved in Buckingham County.

Hosting the presentation was Swami Dayananda with Yogaville Ashram, which is also close to the compressor station.

Speakers during the event included Dr. Lakshmi Fjord, historian and demographer of Union Hill, who spoke about the historical aspect of the area; Paul Wilson, pastor of Union Hill Baptist Church, who encouraged community members to make their voices heard regarding the pipeline; Chad Oba, president of the Friends of Buckingham, who lives close to the compressor station site and spoke about the stress that she and her neighbors have experienced; Suzanne Keller, retired epidemiologist with the Virginia Department of Health, who spoke about the potential health problems that would come from the pipeline and compressor station.

Virginia Delegates Sam Rasoul and Mark Keam spoke about their commitment to the health and protection of the people in the area; Peter Anderson, program manager with Appalachian Voices, spoke about the pipeline’s potential impact on nearby bodies of water, including the James River. There were messages from landowners in the county and one landowner from Pennsylvania, affected by pipeline activity, including Craig Stevens, Richard Walker, Ray Kemble, Ruby and John Laury and Ada Washington.

Wilson said he has pastored the church and Union Grove Baptist Church for nearly 20 years, and said Dominion Energy, the lead stakeholder for the project, has failed to hear or acknowledge the concerns of people affected by it.

“Dominion has been able to control the conversation,” Wilson said. “We want to present the other side.”

The Advisory Council on Environmental Justice, which was created by the Governor’s Office and facilitated by the University of Virginia, also met Buckingham County residents Wednesday to discuss the potential impact of the pipeline construction.

Those looking for a fresh donut to start the morning or end the day won’t have to go far, thanks... read more