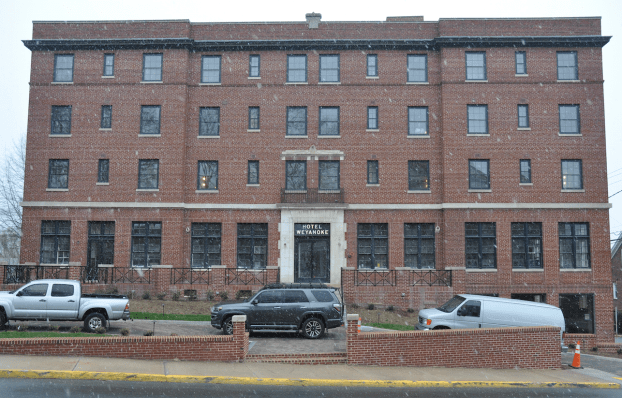 The Hotel Weyanoke is set to open mid-April.

Hotel Weyanoke is receiving a $25,000 grant as part of the Virginia Tourism Corporation’s (VTC) Marketing Leverage Program (MLP). According to a press release, the grant is part of more than $840,000 in matching grant funds to be awarded to 56 local tourism initiatives.

“With the VTC marketing grants we have to come up with kind of a slogan or a theme for what our marketing agenda is going to be,” said Cornerstone Hospitality CEO Kimberly L. Christner. “So I partnered with Green Front Furniture, Longwood University and (the Farmville Area Chamber of Commerce) trying to come up with something that was good for both the hotel and the downtown area and that’s what we agreed to.”

She said since it’s a matching program, recipients had to spend a certain amount of funds in order to receive the grant. The majority of funds spent by Hotel Weyanoke will be $50,000.

“We’re trying to be really good community stewards so we’re working with all the downtown venues in the area that surrounds us so that everybody wins,” Christner said. “So when we open we’re trying to have a lot of collaboration with the downtown entities, as well as Hampden-Sydney, to partner and be a good partner in the community, and our marketing is going to reflect that.”

Hotel Weyanoke General Manager John Shideler gave an update regarding the hotel in January which, according to Shideler, is set to open in late April.

Shideler said the hotel is going to be “absolutely stunning.”

“I’m as thrilled as all of you if not more than you,” he added.

“So lots of variety,” he said, noting that the hotel will have 70 rooms.

He also spoke about the hotel’s three dining options, including Sassafras, a coffee shop featuring pastries, paninis and wraps.

“We’ll have a grab-and-go area where students can come up and go to the window and just grab and go,” Shideler said. “Drink their coffee and head off to certain classes.”

Other dining areas set to be at the hotel include The Cat Bird, the first rooftop food and beverage venue in Farmville; Effinghams, offering freshly made pizzas from a woodburning oven; and Campagna, Hotel Weyanoke’s fine dining Italian-themed restaurant.

He said it is currently under evaluation whether the hotel will do 100 percent valet parking.

“I am not a fan of dictating to a customer that you have to pay to park your car,” Shideler said. “I don’t like it when I’m told that, but we’re not in Washington, D.C. either. So if we do have valet parking, it’s only going to be $5 per car, and the only reason we would do this is because parking is extremely limited.”

He said he’s looking to find an area for people to park their cars if they choose not to do that.

Shideler said price points for hotel rooms, depending on the week, would be, on average, between $129 and $189.