Prince Edward County Middle School will see a new principal starting July 2. Thomas S. Foster, a current assistant principal for Halifax County Public Schools, has more than 12 years of experience as a public educator, according to a press release. 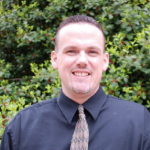 “He earned his (bachelor’s degree) in Education from Lynchburg College and his (master’s degree) in Education Administration from Liberty University,” said Jennifer Kinne, Family and Community Engagement liaison for the school division. “He began his career as a physical and earth science teacher at Dunbar Middle School in Lynchburg and was instrumental in the creation of various programs that targeted math and reading deficiencies in students struggling to meet standardized objectives.”

Kinne said that his list of accomplishments and distinctions is “long and impressive” and includes serving on Gov. Bob McDonnell’s Teacher Cabinet and the state superintendent’s Board Committee.

“In addition, Foster was the Virginia Super Teacher of the Year in 2013 and earned the McGlothlin Award for Teaching Excellence in 2012,” Kinne said. “I am excited and honored to join the Prince Edward County educational family,” Foster said. “I look forward to the opportunity of working with our staff and community to further the goals of Prince Edward County Public Schools and obtain the highest degree of excellence deserving of our families and community.”

“This position announcement attracted a very competitive pool of candidates,” said Division Superintendent Dr. Barbara Johnson. “We are confident in our choice and believe that Prince Edward County Public Schools will benefit from Mr. Foster’s proven leadership as we transition into the 2018-19 school year.”

Playing for the Birdhouse Build

A charity basketball game held March 8 in Willett Hall on the campus of Longwood University is one of many... read more