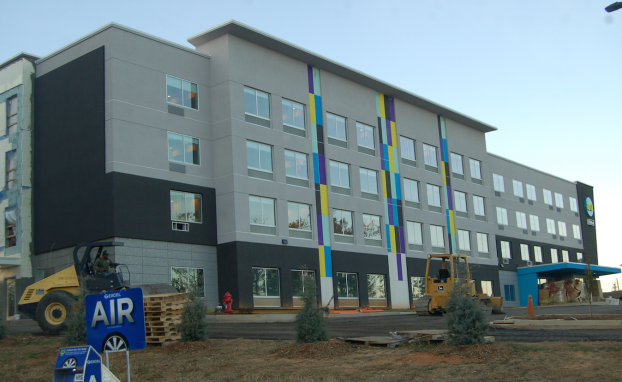 The Tru Hilton Hotel at 1913 S. Main St. is set to open by the end of the year or early into next year. According to a representative from the hotel, the hotel will contain bedrooms and unique amenities (photo by Morgan White).

Q: What’s the progress on the hotel being built along South Main Street? When will it open?

The Tru Hilton Hotel, currently under construction at 1913 S. Main St., is set to open in the next few months and will be the fifth in a series of hotels by Hilton to open in the United States, a representative of the hotel said.

Katherine O’Connell, vice president of Operations and Sales with Kalyan Hospitality, a Glen Allen-based organization heading the hotel’s construction, said the hotel is set to open.

O’Connell said the rooms are almost complete in the hotel. She said the rooms on the fourth floor were constructed first, working down to the first floor.

“The vanities, the toilets are all installed,” O’Connell said.

She said 68 of the 106 rooms in the hotel include two queen sized beds while 38 rooms have one king-sized bed.

“Right now we’re accepting reservations after Feb. 12. We always build a little bit of a buffer in there in case of we experience weather delays or any other unforeseen circumstances,” O’Connell said.

O’Connell said she enjoyed the town, and has had lunch meetings in the area a few times and is looking forward to looking at the furniture stores.

O’Connell said the Tru Hilton hotel is the fifth hotel in the Tru series to open in the U.S. and will offer a relaxed and convenient atmosphere, including a study area where guests can work with laptops, a pool table where guests can play and a round facility in the lobby, called The Hive, where guests can interact with hotel employees and purchase snacks.

“(The Tru) brand is a new concept for Hilton,” O’Connell said. “And I think they’ve done a very good job of positioning it there in Farmville. I think people will find the hipness and the coolness of it really fits the city and the community there.”

Farmville Town Manager Gerry Spates said he believes the hotel will be an asset not only for area residents but for out of town visitors as well.

Why is there a new stoplight at the intersection of St. George and Third Street? What is the data behind... read more