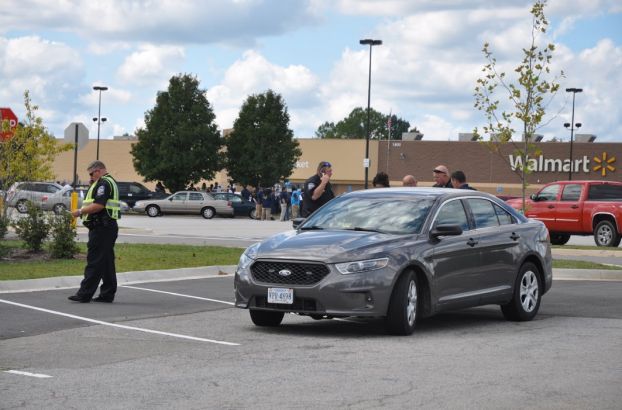 Police confer shortly before Walmart reopened Friday following hoax call from a man claiming he was inside the store having suicidal thoughts (photo by Jordan Miles).

Suspects have been identified in connection to a hoax that led police in Farmville to believe a man inside Walmart was in possession of a gun, telling police in a telephone call he was having suicidal thoughts.

Police say no charges are pending at this time as the investigation continues.

Staff and customers at Walmart were evacuated shortly before 1:25 p.m. Friday after the call was allegedly placed by the man, who made the call to Farmville police.

Police searched the building, unable to find the caller.

“The incident at the Walmart in town has been investigated and resolved and the area is now safe and secure,” town officials said in a Friday afternoon statement. “There was a threat called in that ultimately turned out to be false. The suspects have been identified. There is no reason to believe that there is a risk for a further threat.”

When the employee learned the loan — being advocated by the same man who called police Friday — was a potential scam, she cut off communications with him after he asked her to wire him money.

Ellington said the hoax call was allegedly retaliatory in nature.

No one was injured and no shooting took place, according to police. Walmart reopened at about 2 p.m.

A third suspect considered armed and dangerous by police in Farmville has been taken into custody in connection with a... read more