FARMVILLE — A 49-year-old Keysville man was arrested following a reported breaking and entering at the FACES Food Pantry on Depot Street on Monday morning. 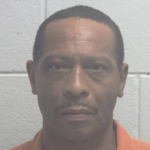 According to the Farmville Police Department, a FACES worker saw Carl Edward Rice when they entered the front of the building.

“(The) subject was found hiding behind a freezer,” police said.

According to police, Rice was arrested and charged with breaking and entering.

Q: Will a public hearing be held before the Farmville Town Council makes a decision regarding the intersection improvements at... read more