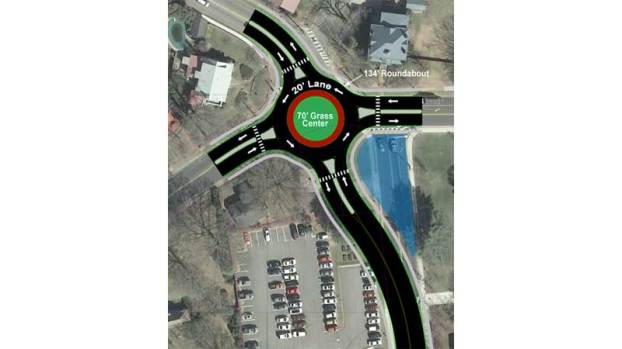 Engineering firm McCormick Taylor is recommending a 134-foot roundabout be constructed at the intersection of Griffin Boulevard and High and Oak streets. (Courtesy of the Town of Farmville)

Farmville Town Manager Gerald Spates said Wednesday during the town council’s monthly work session that if the town crews performed the work required to realign the intersection of Oak and High streets and Griffin Boulevard, it could possibly be done for around $1 million.

Spates cited the three options for construction for the intersection, realignment being one — which has an estimate by engineering firm McCormick Taylor for nearly $2.7 million — and constructing a roundabout, which the firm recommended and estimated would cost nearly $3.8 million. The third option is leaving the heavily-traveled intersection as is.

Farmville Mayor David Whitus asked Spates to bring a list of possible dates to the council’s regular September meeting Wednesday in planning to potentially hold a public hearing regarding the intersection.

“A number of people have communicated about it, and to everyone who’s communicated, I’ve said, ‘There will be another public hearing, and you’ll have an opportunity to come out and express your views,’” Whitus said.

Spates said there was a possibility that the town could employ revenue sharing with the project with the Virginia Department of Transportation (VDOT), where VDOT would pay half of the associated costs.

“The only issue with the roundabout is, you know, it’s a long process,” Spates said. “It’s going to take a while to do it.”

Included in the Wednesday council meeting packet is a memorandum regarding an agenda item titled “Continue Matter — Update from the Infrastructure Committee on High Street, Oak Street and Griffin Boulevard (Roundabout/Align Intersection).” The memorandum notes the committee agreed following the Aug. 14 meeting that further discussions needed to take place before making a recommendation to council on the roundabout versus realigning the intersection.

McCormick Taylor presented cost estimates during a community meeting in the council’s chambers May 31 with a recommendation for a roundabout in the intersection.

According to Don DeBerry, a senior traffic engineer with McCormick Taylor, “there’s revenue sharing funding sources, (which are the) most likely funding source we would apply for in this case. There’s a $10 million cap per project for any submitting agency, and it’s a 50/50 split between VDOT and the applicant,” which DeBerry said, at the meeting, would apply to all project costs.

DeBerry estimated that construction of the roundabout would take 18 months.

The community meeting included about 40 members of the community gathered in the council’s chambers to hear the recommendation and to discuss the intersection, including many town council members and town officials.

Only one person spoke in disapproval of the construction of a roundabout at the intersection, citing pedestrian safety. Others who spoke indicated their favorability toward a roundabout.

Council’s unanimous decision to contract with the Glen Allen-based engineering firm came with a price tag of $44,000 — one that’s being split with Longwood University.

According to a matrix presented by the engineering firm, a proposed roundabout ranked above a realigned intersection and no improvements based on calculated criteria of public comments in favor, level of service operation and construction cost, along with known criteria, including lifecycle cost, maintenance of traffic/constructability, vehicular safety and pedestrian safety.

Out of the three alternatives, the roundabout ranked highest in public comments in favor, level of service/operation, construction cost, lifecycle cost and vehicular safety. Intersection realignment ranked highest only for pedestrian safety.

A five-story 195-bed student housing complex was proposed in July that would sit at the intersection of Appomattox, High and Oak streets — potentially impacting the intersection in question.

According to a letter from DeBerry, the “potential number of pedestrian trips anticipated (from the complex) … don’t have a significant impact on the results … So, the (project) should not be a problem.”

“The grant application is for either,” DeBerry said regarding a VDOT revenue sharing program during the May 31 meeting, citing that the VDOT cost sharing could apply to an intersection realignment. “But, again, you’re asking for VDOT dollars, and we’re talking about their design manual. They basically say, ‘If you’ve got a roundabout and it’s feasible, we want you to pick that.’”

The Rural Education Foundation Board (REFB) and Fuqua School have embarked on a $1.9 million facilities improvement project, one that... read more