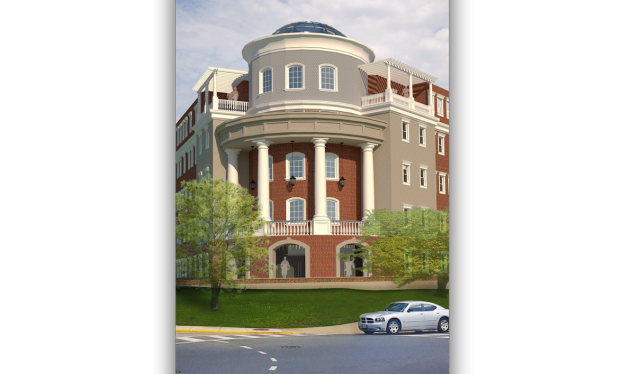 North Carolina-based developer Mike Kelley is working with Thompson & Litton to construct a 95,000-square-foot, five-story student apartment building that, along with its proposed parking, will encompass the area the four Martin homes currently occupy along Appomattox and High streets northeast of the roadway’s intersection with Griffin Boulevard (Thompson & Litton).

Editor’s Note: On Sept. 19, The Herald sat down with Robert and Sherry Martin, along with developer Mike Kelley and attorney/adviser Frank F. Rennie IV, to discuss the Martins’ proposed rezoning request. This is the second of two articles from that interview. 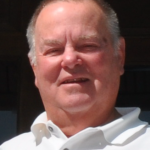 “The economy (and) from a construction standpoint it really, you almost have to make it one (building) because … for example, a building like this you’d have to put elevators in, you’d have to put stairwells in, you know, it becomes an economy of scale and you’ve got to remember you’ve got to be very respectful of the students of what the rent factor is,” said Developer Mike Kelley of Kelley Properties, who’s working with Robert “Bobby” and Sherry Martin, who own the parcel of property at the intersection, which includes four houses that could be demolished if the project moves forward.

“There’s a lot of things you could do, two buildings, this and that, but you’ve got to remember the student has a budget that they can pay toward their student living,” Kelley said. “You’ve seen a conceptual rendering, but that’s what we wanted to show … that (at) that intersection (we) want to make a nice statement with that building. And that’s one thing we told (Longwood University President W.) Taylor (Reveley IV) is we’re just not going to put up a building that we think looks good,” said Kelley, who noted he walked the Hampden-Sydney College campus recently.

“The height of the building is kind of set in place with the one building because, again, the kids here have a rent factor they can pay and you’ve got to kind of build it according to what they can afford to pay. …”

He said if the number of floors decreased, “the cost factor would be such where the kids could not afford to be here.”

He noted plans on lowering the grade to about sidewalk level at the site “so when you build it up it’s not so tall.”

The Martins are seeking to rezone their just more than an acre of property containing four houses they own at the intersection of High, Oak and Appomattox 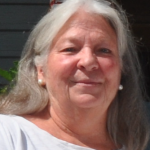 streets from R-3 Residential to R-3A Residential. The request, along with a separate request from Walk2Campus Holdings LLC President and CEO Matthew King to rezone 37 of his firm’s student housing properties to R-3A Residential, are set to be considered by the Farmville Planning Commission on Wednesday, Sept. 27 during its 7 p.m. meeting. During the Wednesday meeting, planners could vote to hold a public hearing on the requests at a future date.

The Martins’ request includes repealing the density level maximum of 10 units per acre for the R-3A Zone to allow for the proposed complex. The R-3A Zone is the same that Longwood University’s main campus is classified as, and the zone Walk2Campus is seeking.

During a July planning commission meeting, 18 people voiced stern opposition to the rezoning requests, citing parking, quality-of-life issues, losing the historic feeling in the area, “bigger-city problems,” traffic congestion, the demand for student housing and precedent that could be set by the decisions.

Regarding parking, Bobby said there are plans to develop satellite sites in downtown Farmville.

“(Students) don’t move their cars until they drive home because the parking is tight,” Sherry said. “They walk to everything … That’s sort of the background of doing this is having a place where kids are safe, they have a resident person, they can walk to everything in town and their cars won’t move.”

“We have the parking,” Kelley said. Bobby said there would be some parking around the building.

“It’ll accommodate all the parking if we had to,” Bobby said of the satellite sites, with Sherry noting, “And some.”

“They’re here already,” Bobby said of the students in the area of Buffalo, Grove, Appomattox and High streets. “I couldn’t imagine that it would be any different than it is right now.”

“We love living here, we do. This is something we haven’t really, really thought through,” Sherry said.

“It’s just been really hard. We’ve had some not very nice things (said), I mean, it’s just been a hard go for us,” Bobby said.

Sherry said she and Bobby have been “immersed” in the Farmville community as volunteers and business people.

“We were part of the inception of the Heart of Virginia Festival. …,” Sherry said, noting the STEPS building was where it was because “Bobby and I spent a tremendous amount of time and effort to help STEPS get where it is.”

“And the taxpayers of Virginia a lot of money,” Rennie said.

“Gracious, that’s a big issue … The taxes that we’re going to pay the county and the town will help our area, and it’s got to help,” Bobby said.

Sherry said she and her husband would sell the property at the intersection “but we probably will invest in the building.”

Kelley said it would be nice to have the Martins as “a partner of some capacity … We’ve never really talked about that. …”

“We were surprised,” Sherry said of Walk2Campus’ proposal to rezone its properties following the Martins’ amended request.

“Walk2Campus was complimented on how well they kept up all this area … it is neat and clean and they do a good job … we’ve gotten along with them well,” Sherry said, referencing an earlier planning commission meeting.

“It did sort of surprise us … They don’t really have a specific project in mind, they just are aware, as we are aware, (that) this whole area is students,” Sherry said.

“I think (King) feels like it’s coming,” Bobby said. “And probably now is the time to push the button.”

“Its sad. There were some beautiful houses. There aren’t anymore and that’s sad for this whole town, but it’s reality,” Sherry said of the houses on High Street.

Earlier in the interview, Sherry noted that the area was no longer historic.

“We don’t think (Reveley) would have had long conversations with us if the bed space wasn’t needed,” Sherry said.

“We find Walk2Campus to be a compliment to what we want to do,” Kelley said, “and I think we look at it is with their brand being a good brand; we see it to be complimentary to what we’re going to do, and to answer your question directly, does that scare or change (us) … I look at (it as) all it does is compliment, really.”

Kelley said he’s encouraged those with concerns to meet with him.

“Sherry and I are in this for the town and for Longwood … We want everybody to be happy with it,” Bobby said.