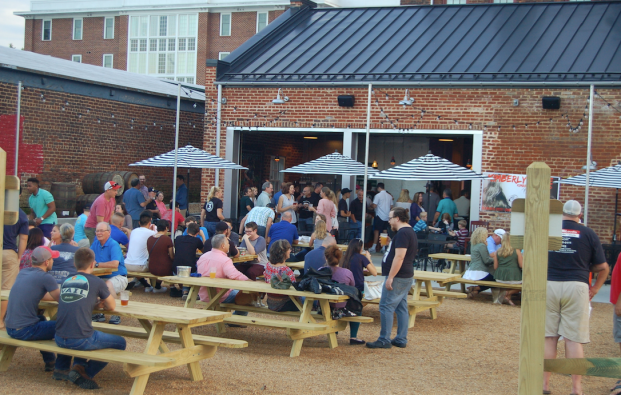 MORGAN WHITE | HERALD Third Street Brewing Co. held a soft opening Friday and Saturday which drew large crowds of people from across the Heart of Virginia.

Mark Kernohan, one of the founders of Third Street Brewing Co. and the brewery’s general manager, sits at one of the wooden tables inside the building following the brewery’s successful first weekend of operation.

“Just the range of different people just really made me so happy because that was our vision all along,” Kernohan said in reference to the soft opening. 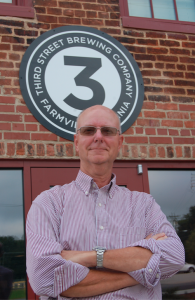 Mark Kernohan, one of the founders of Third Street Brewing Co. and the brewery’s general manager, smiles outside the new business (photo by Morgan White).

“So when I came to town, I kept seeing places where students would hang out or people who were older would hang out or I would see tourist kind of places, but I didn’t see a place that would combine them all.”

Kernohan said the brewery will hold a grand opening and ribbon cutting Oct. 18 at 6 p.m.

Kernohan moved to Farmville almost two years ago when his wife was recruited to Centra as a nurse practitioner at its PACE Program.

“When we came down here and tried to decide what it is that this town could offer us as the newbies, you know, we shopped the town. We wanted to see where we would fit in,” Kernohan said. “On the way we stopped in (Amherst) and had a pint at the Amherst Loose Shoe Brewing — from Amherst, Ohio. I wanted to buy a T-shirt that said ‘The Oldest Brewery in Amherst.’ I thought, ‘That’ll be great,’ and I found out about how the legislation changed in 2012 to allow breweries to sell beer by the glass.”

He said that was a game changer, citing the legislation as to what what exploded the craft beer industry in Virginia.

“So, I come into town almost two years ago, trying to figure out where I’m going to be. I see what’s going on at Loose Shoe, (and) I’m looking at different spaces in town and thinking, ‘There’s an opportunity here,’” Kernohan said. “So, working with my real estate agent, Navona Hart, she says, ‘You know, you really should talk to my attorney, Harlan Horton. He knows some people.’”

Kernohan said he talked to Horton and told him about his vision to create a brewery on a small scale to where people could have “a lot of fun” in the space.

“(Horton) says, ‘You know, there’s a guy who talks just like you, you should meet him,’” Kernohan said. “I said, ‘Great, let’s set up a meeting.’ And I met Chris Sadler.”

He said Sadler has a real estate company in Richmond.

“We start talking about this need for a gathering space in the spirit of an English pub and after the meeting I said, ‘Here’s the deal. We can either both create our own breweries or we can work together,’” Kernohan said. “He says, ‘Well I’ve already got these other guys.’”

The others were Gary Elder, John Dudley and Keith Rider.

“(Sadler) had already started talking with (Walk2Campus Holdings CEO and President) Matt King. I had my own vision for where this place was going to be,” Kernohan said.

The brewery has had more than 40 community members who have invested in the business. Kernohan said the brewery is looking to have food trucks and live music on Friday and Saturday nights.

Suspects have been identified in connection to a hoax that led police in Farmville to believe a man inside Walmart... read more