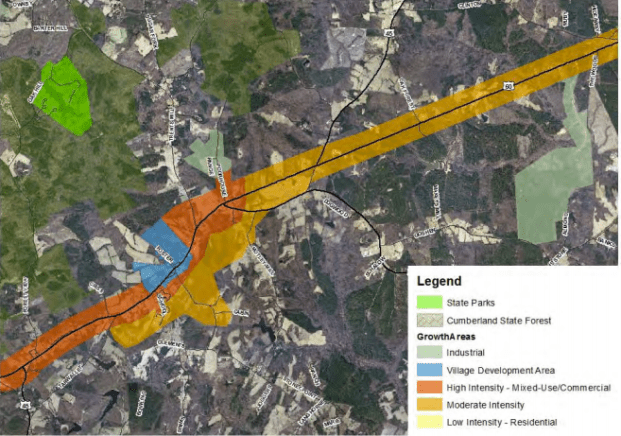 CUMBERLAND COUNTY PLANNING AND ZONING Pictured is a future growth area map from Cumberland County’s comprehensive plan, which foresees development along U.S. Route 60. Comprehensive plans include such maps, forecasting and planning for growth, which, in turn, helps drive zoning decisions.

Zoning a ‘powerful’ tool for localities

Q: What is zoning? How does it work, and how do governments and people use it? What’s the purpose of it?

Permitted by actions of state legislators and the Code of Virginia, zoning “is one of the most powerful tools available to local governments for regulating land use” in counties and towns, according to the Virginia Association of Counties’ (VACO) “Virginia County Supervisors’ Manual.”

According to the Code of Virginia, which allows localities to enable zoning ordinances, “any locality may, by ordinance, classify the territory under its jurisdiction or any substantial portion thereof into districts of such number, shape and size as it may deem best suited to carry out the purposes of this article, and in each district it may regulate, restrict, permit, prohibit and determine specific uses pertaining to land, buildings, structures and other premises for agricultural, business, industrial, residential, flood plain and other specific uses.”

Such ordinance can also take into account, according to the Code, “the size, height, area, bulk, location, erection, construction, reconstruction, alteration, repair, maintenance, razing or removal of structures; the areas and dimensions of land, water and air space to be occupied by buildings, structures and uses, and of courts, yards and other open spaces to be left unoccupied by uses and structures, including variations in the sizes of lots based on whether a public or community water supply or sewer system is available and used; or the excavation or mining of soil or other natural resources.”

Along with the Town of Farmville, the counties of Buckingham, Cumberland and Prince Edward have zoning ordinances for their respective localities.

“(Zoning) really doesn’t help or hinder (growth),” said Dr. William Burger, chairman of the Cumberland County Planning Commission. “What it tries to do is locate the growth. If someone wants to hypothetically put a subdivision in a very rural area, there’s certain things you have to think about, you know, schooling, roads, water, sewer. So what you try to do with zoning is neither inhibit or encourage but rather try to plan where it goes.”

“Zoning provides benefits to the county and its citizens by providing a mechanism to protect and enhance property values by preventing incompatible land uses and commercial business operations from locating in more densely-populated areas,” said Rob Fowler, the zoning and planning administrator for Prince Edward County. “It also helps preserve the nature and character of Prince Edward County.”

Fowler said zoning helps implement “the community goals and objectives that are identified in the comprehensive plans and gives the community some control over acceptable land uses and quality of life as the county grows.”

“One could argue that zoning hinders the community by limiting the expansion of uses that no longer conform to the current zoning standards, can discourage development in certain locations of the county and requires citizens to give up some property rights for the common good of the community,” Fowler said.

According to the Code of Virginia, planning commissions across the state are charged with preparing and recommending “a comprehensive plan for the physical development of the territory within its jurisdiction and every governing body shall adopt a comprehensive plan for the territory under its jurisdiction. In the preparation of a comprehensive plan, the commission shall make careful and comprehensive surveys and studies of the existing conditions and trends of growth, and of the probable future requirements of its territory and inhabitants. The comprehensive plan shall be made with the purpose of guiding and accomplishing a coordinated, adjusted and harmonious development of the territory which will, in accordance with present and probable future needs and resources, best promote the health, safety, morals, order, convenience, prosperity and general welfare of the inhabitants, including the elderly and persons with disabilities.”

Localities’ comprehensive plans, according to the Code of Virginia, shall recommend methods of implementation, including a zoning ordinance and zoning maps, along with an official land use map.

According to the Code of Virginia, “whenever a local planning commission recommends a comprehensive plan or part thereof for the locality and such plan has been approved and adopted by the governing body, it shall control the general or approximate location, character and extent of each feature shown on the plan.”

“Zoning is just a tool that allows you to realize the goals the county’s citizens set up (in the comprehensive plan),” Burger said.

He agreed zoning was important in executing the goals established in the comprehensive plan. “That’s exactly what it is. It’s a tool that’s utilized to try to reach the goal that the citizens want growth and where they don’t want growth,” Burger said.

Each zone has permitted uses, which allow no need for permissions from local governing bodies. For example, according to Buckingham’s zoning ordinance, one could establish a church, green house, adult or child day cares by-right in the A-1 Agricultural Zone.

Certain uses in specific zones may require a special or conditional use permit, which comes with public hearings by planning commissions, boards of supervisors and town councils.

“Where required by this chapter the location of certain permitted uses shall require, in addition to the zoning permit and certificate of occupancy, a conditional use permit,” notes the Town of Farmville’s zoning ordinance. “These permits shall be subject to such conditions as the governing body deems necessary to carry out the intent of this chapter. These conditions may include, but not be limited to parking, screening, setbacks, area, hours of operation, illumination, noise level, pollution control and control of odors, control of traffic and public safety.”

For example, in the town’s B-4 Business Zone, an apartment, condominium or townhouse development are permitted uses but require a conditional use permit.

Rezoning, like conditional use permits, require public hearings by the locality.

When a rezoning case comes before the planning commission, Burger said commissioners first see how consistent it is with the comprehensive plan.

“Spot zoning is kind of a legal term,” Burger said. “Spot zoning would be where you rezone something for the benefit of one individual and it really doesn’t impact anyone else to the good. That’s what I mean by spot zoning. You just rezone something, it benefits Mr. A but it doesn’t benefit the county, the neighbors and is completely antithetical to the whole notion of the comprehensive plan. That’s kind of what you mean by spot zoning.”

“Zoning is an essential guide for the orderly development of the town to ensure the health, safety, convenience and welfare of the public,” said Gerald Spates, Farmville’s town manager and zoning administrator. “Zoning ordinances are often amended as conditions that are set by the governing body within the town change in order to ensure the growth of the town.”

Q: I still see the “For Lease” sign on the property at the vacant Huddle House. Is it still going... read more