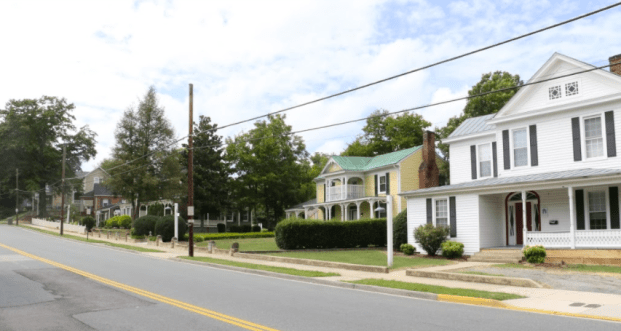 JORDAN MILES | HERALD The Walk2Campus student-housing properties pictured in the foreground could soon be rezoned as R-3A Residential — the same zone that Longwood University’s main campus is classified as and a zone that Robert R. and Sherry P. Martin are seeking for the proposed five-story student housing complex proposed for their property which, if approved, would be located at far left in this photo.

Walk2Campus Holdings LLC President and CEO Matthew King is seeking to rezone 37 of his firm’s student housing properties in Farmville to R-3A Residential.

According to a map submitted by King to the town, most of the properties he’s seeking zoning changes for are currently zoned R-3 Residential. One is zoned B-1 and another is zoned B-2.

The properties he’s seeking to have rezoned are on Grove, High, Appomattox, Garden, St. George, High, Beech, Buffalo, Randolph streets in town. Most are in proximity to Longwood University.

“I guess it’s really up to town council and (the town) planning commission as to what the future of the neighborhood adjacent to campus is going to be,” King said, “in that if there’s a project that is seeking higher-density zoning, then logically we would like access in the future to the same zoning.”

King said ultimately, “it’s what council and planning commission and folks in Farmville decide they want that neighborhood to be and once everyone’s square on that, then we can go from there.”

King’s request comes on the heels of a rezoning request from Robert R. and Sherry P. Martin to rezone their just more than an acre of property they own at the intersection of High, Oak and Appomattox streets for a proposed five-story, 95,000-square-foot student apartment complex.

Like the Martins’ request, the matter will have to be considered, along with public hearings, by both the town’s planning commission and town council. The commission will offer a recommendation to council.

“The zoning request will be on the agenda for this week’s town council meeting,” said town spokeswoman Kate Pickett Eggleston. “Council will refer the request to the planning commission, who will meet and then hold a public hearing. After the planning commission’s public hearing, they will make their recommendation and the matter will go back to town council. Council is also required to hold a public hearing and will take action after the hearing. This will allow for plenty of opportunities for the public to gather information and express their views.”

Just as King is seeking, the Martins want their property to be rezoned from R-3 Residential to R-3A Residential — the same zone that Longwood University’s main campus is classified as.

According to the Martin’s letter and Town Manager Gerald Spates, the Martins’ new request also includes changing the density level for the R-3A Zone to allow for the proposed 195-bed apartment complex.

In late July, the Martins withdrew their original request that the Farmville Town Council repeal the density requirement of 10 units per acre for the R-3 Residential Zone.

According to Spates, there are some residential properties that lie within the footprint of and adjoin Longwood University’s main campus are zoned R-3A.

“It’s maybe 20 houses that would be affected on the campus itself,” Spates said in an earlier interview.

According to town code, the overall density in an R-3A Residential zone shall not exceed 10 dwelling units per acre. The Martins’ request seeks to repeal this stipulation.

Uses in the R-3A Zone include rooming and boarding houses and single-family dwellings, university-related facilities with a conditional use permit.

“This district should provide a suitable environment for persons desiring the amenities of apartment living and the convenience of being closest to shopping and employment centers and other community facilities,” the code reads regarding the R-3A Zone.

The R-3 Zone includes many of the same stipulations in the R-3A Zone, including overall density not exceeding 10 dwelling units per acre — the rule the Martins are seeking to change.

“We have listened to a number of concerns about how large an area this change could affect,” the Martins said in their letter to the Farmville Town Council dated July 28 which included their new zoning request, in reference to repealing the density request in the R-3 Zone. According to the town’s zoning map, there are more than seven other areas encompassed in the R-3 Zone across Farmville — which, if the original density repeal were approved — would affect.

“Longwood University has built similar projects within close proximity to our proposed project, and by extending the R-3A Zone, it would only affect our four lots and no one else,” the Martins said in the July letter.

“I’ve been in the Martin’s chair, in the developer’s chair in many other towns, and it’s not a fun place to sit,” King said during a late July planning commission meeting attended by about 60 people — including the Martins, town council members and Developer Mike Kelley of Kelley Properties and Chris Phillips with architectural and engineering firm Thompson & Litton.

Both firms are working with the Martins on their proposal.

“We’re actually not opposed to this project. We don’t fault folks for bringing it forward. We don’t mind the competition … I think the more students that live in town are going to help businesses in town,” King said.