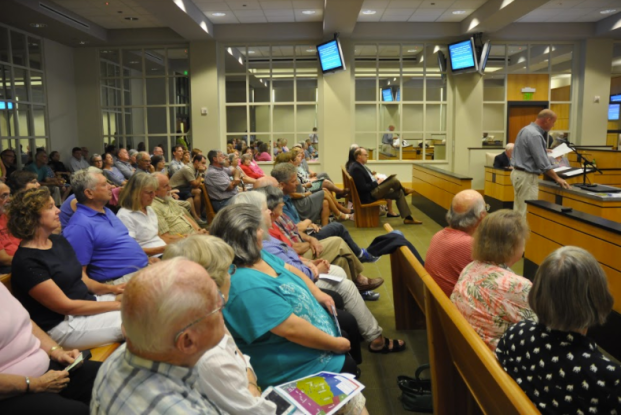 Eighteen people spoke against two rezoning requests that were referred to the Farmville Planning Commission on Wednesday night by the town council. Pictured, Harlan Horton speaks at the podium at right in the packed meeting room in town hall. (Photo by Jordan Miles)

Eighteen people voiced stern opposition to two rezoning requests under consideration by town officials that many speakers said would change the character of Farmville if approved.

About 50 people packed the chambers of the Farmville Town Council’s Wednesday meeting, where council members unanimously voted to refer to the planning commission two rezoning requests — one from Robert R. and Sherry P. Martin to rezone their just more than an acre of property they own at the intersection of High, Oak and Appomattox streets for a proposed five-story, 95,000-square-foot student apartment complex from R-3 Residential to R-3A Residential, and a separate request from Walk2Campus Holdings LLC President and CEO Matthew King to rezone 37 of his firm’s student housing properties to R-3A Residential.

The Martins’ request includes repealing the density level maximum of 10 units per acre for the R-3A Zone to allow for the proposed 195-bed apartment complex. The R-3A Zone is the same that Longwood University’s main campus is classified as.

Speaking to the rezoning requests, which will both be considered by the planning commission during its Sept. 27 meeting where commissioners could vote to set October public hearings on the matters, residents cited parking, quality-of-life issues, losing the historic feeling in the area, “bigger-city problems,” traffic congestion, the demand for student housing and precedent that could be set by the decisions.

Teri Kidd, who said she’s lived in Farmville for 36 years, said she objected “in the strongest possible terms” to the rezoning requests, noting that the requests could bring “bigger-city problems to historic Farmville.” She said the requests would lead to “increased and unpleasant population density and the inevitable parking problems that follow, already, (are) an issue. …”

She urged the town council to “conserve the beauty and qualities of the town by voting down the requested zoning exemption.”

Susan Bagby, who lives on First Avenue, said she was “unalterably opposed” to the requests.

George Bagby, who said he’s lived in Farmville for 45 years, said the Martins’ request was the “most outrageous proposal of any sort I’ve seen in those 45 years,” noting the apartment complex “would create more problems than it would solve,” calling the proposal a “complete disaster.”

“I am here because I want to say that I think we need to all be aware of how special this community is, and when I bring people into town, my job is to help them fall in love with this place so that they’ll buy houses and spend money and grow businesses here,” said Navona Hart, a real estate agent in Farmville. “…I want my council members to please really review our community. Growth is inevitable. We’re going to have to grow. People love it here, they’re going to keep coming. But having a plan in place that makes sense so that things don’t feel oppositional to many of our residents would be in our best interests. …”

Carol Fauci questioned the need for additional student housing, citing the reason was possibly  being used as a ploy for the project.

“Remember — once the homes are gone, they’re gone forever,” Fauci said. “There’s no going back. Do we really want to change a portion of our history?”

Faye Green noted she was “feverently against this rezoning change,” citing parking, overpopulation, noise and trash as potential issues and noting her paramount concern was sentiment.

“High Street has always been the heart of Farmville for me,” she said, noting if the requests were approved, they would “forever alter the face of Farmville.”

Second Avenue resident Harlan Horton asked council members “to remember that what we’re doing is we’re changing a law in the Town of Farmville,” noting the town’s ordinances were law.

Reading the purpose of the town’s zoning ordinance, he cited the ordinance was “for the purpose of health, safety, convenience or general welfare of the public, and accomplishing the objectives of the Code of Virginia,” also noting the priorities set in the ordinance in its opening statement.

“I am opposed to changing the ordinance as it’s been requested by the Martins and Walk2Campus. I also believe that the residential nature of that area and its historic components are consistent with our identity in the Town of Farmville, and I think, as someone said, once that changes, we can’t go back … Are we historic Farmville? Do we want to preserve that? Growth can happen with proper planning for the future.”

Robin Smith, who lives on First Avenue, said she was “rabidly opposed” to the rezoning request and the density change around High Street.

“I come to you saying this … what you’re voting on is a complete structural change,” said Warren Reid. “If it’s that easy to change the zoning for, lets call it what it is, wealth … you are setting a precedent toward the other areas of Farmville as well.”

The Martins’ request, which came July 28, and the Walk2Campus request, which came Aug. 1, could see a recommendation to town council in October following a public hearing that month, according to the town. Following a November report to town council from the planning commission, council members could hold a winter public hearing in either December or January and possibly vote on the requests in January or February.

The properties King is seeking to have rezoned are on Grove, High, Appomattox, Garden, St. George, High, Beech, Buffalo and Randolph streets in town. Most are in proximity to Longwood University.

Uses in the R-3A Zone include rooming and boarding houses, single-family dwellings and university-related facilities with a conditional use permit.

“I’ve been in the Martins’ chair, in the developer’s chair in many other towns, and it’s not a fun place to sit,” King said during a late July planning commission meeting attended by about 60 people — including the Martins, town council members and Developer Mike Kelley of Kelley Properties and Chris Phillips with architectural and engineering firm Thompson & Litton.

Both firms are working with the Martins on their proposal.

“We’re actually not opposed to this project. We don’t fault folks for bringing it forward. We don’t mind the competition … I think the more students that live in town are going to help businesses in town,” King said.

FARMVILLE — More than 500 people attended nine National Night Out events held throughout the Farmville in conjunction with similar... read more