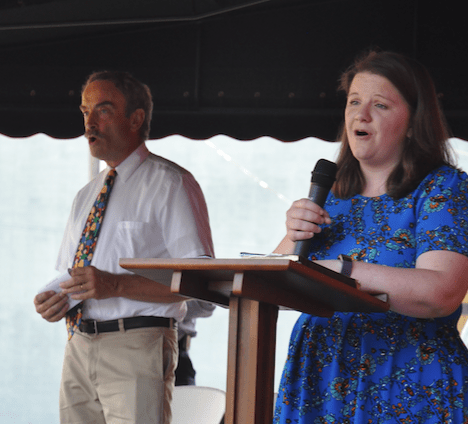 An estimated 200 people gathered Sunday evening at the Town of Farmville’s caboose at the High Bridge Trail Plaza on Main Street in downtown Farmville to offer prayers and songs of comfort for those affected by the violence in Charlottesville over the weekend.

“I thought it went extremely well, particularly on such short notice,” Whitus said following the event. “It’s always phenomenal to see people from all walks of our community come together from every socio-economic class (and) from every faith,” he said, noting the presence of Muslims and Mormons. “There were people here from all religious backgrounds, and it’s always wonderful to see all those people come out, come together and share together and have a time to pray for our community,” Whitus said.

While the event included scripture offered by Kiehm, time for individual prayer with members of the community in pairs, along with verbal prayers, were offered.

One person was killed while several were wounded when a vehicle plowed through a crowded downtown Charlottesville street Saturday, before two Virginia State Police officers were killed when a helicopter crashed near Charlottesville.

No foul play is suspected in connection with the helicopter crash. The helicopter was part of the police presence by Virginia State Police during the protests.

“In the emerging conversations that we have had over time, it is good to build fellowship and to know that we do not journey (alone), anyone of us, but that we live in community …” Kendall said, opening the service. “As we have an opportunity to gather and be together as a community, each of us with our own ears having heard the news out of Charlottesville and the events that have taken place there over this weekend, and so to be with you is a gift to me … This is a spontaneous gathering.”

Blakely and Kendall led the large crowd in “Live in Charity” before those in attendance were asked to pass the peace of God through handshakes, embraces and through their words. Blakley would also perform “Through It All.”

“My mind is blown that in 2017 we even have to stand here and have this conversation and we have to deal with racism — and I’ll call it what it is,” Clark said. “My mind is completely blown that people have worked so hard to get us to where we are, especially in this community, and people are working against that and are trying to dismantle what has been done in terms of race relations in our country. And people still believe that the color of their skin holds them superior to someone else. My mind is blown by that.”

She challenged the community to “continue to pray … I know that He is much bigger than anything that is thrown our way,” she said, noting her faith in God. “Even though we may not understand it now, God has a reason for everything.”

“We fall short with man’s words,” Kiehm said, “but we have the living life-changing word of God that speaks for us, through us and to us, and so now I draw your ears and your hearts to God’s word,” he said before reading Psalm 27 from the bible.

“For all the different faith traditions, all the racial ethnic traditions, all the socio-economic backgrounds, all the different educational levels, we bring all of who we are before you, oh Lord, but we come before you as a people in pain,” Robinson said, “because we have seen extreme and excessive violence not far from here in a place so many of us have visited with joy and delight. And we’ve seen it turn into a place of carnage. Our hearts break within us and we wonder, ‘Is that what we have become?’”

“We witnessed an act of terrorism yesterday that was made even more horrific in the knowledge that there were people that call themselves brothers and sisters in Christ,” Meck said. “We are all one family. And we strive to make sense of this, how there could be such hatred and bigotry,” she said, before offering a prayer from Episcopal Church’s “Book of Common Prayer.”

Howell sang “Cornerstone,” and one verse of “Amazing Grace.”

Farmville Mayor David Whitus is working with clergy in the town of Farmville to create “a time of prayer as a... read more