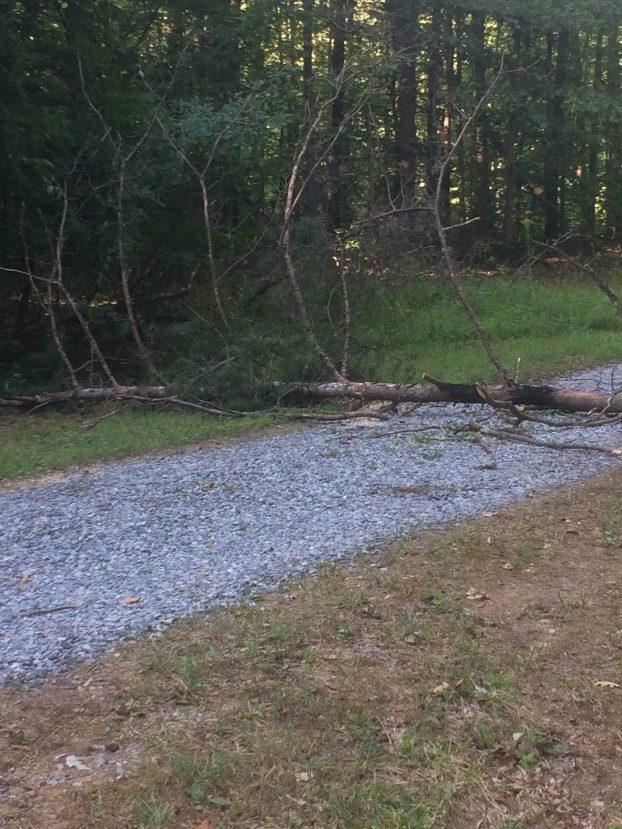 This pine tree fell on a power line and caught fire Sunday. It was cut down by employees of Southside Electric Cooperative in the 100 block of Stonewall Drive in Farmville. Photo by Emily Hollingsworth.

A tree that fell on a power line Sunday afternoon caught on fire, shutting off electricity in the 100 block of Stonewall Drive in Farmville.

Members of the Farmville and Randolph District volunteer fire departments responded to the incident, which was reported at 4:42 p.m.

Larry Price, who lives on Stonewall Drive, said he installed a generator after he lost power before the fire.

He attributed the first power loss to a storm early Sunday.

“If you live in the country, you’ve got to be ready,” Price said.

Price, with his neighbors, noticed the fire and called it in.

Employees from Southside Electric Cooperative arrived at the scene shortly after firefighters departed.

The employees cut down the pine tree, cleared the tree from the road and reignited the fuse from a power line on High Hill Road to restore power to the area.

At the site of the former first segregated secondary school for African-American students in Buckingham County, residents are continuing the... read more