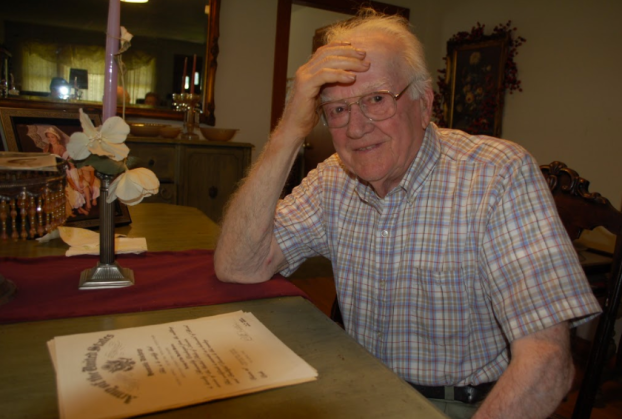 Claude Morris Sr. grew up and was raised during The Great Depression in southern Buckingham County, and would eventually become a farmer and a custom home builder, serve for 28 years on the Buckingham school board, work at Craddock-Terry in Dillwyn, get married and have four children — all, pretty much, at the same time. Photo by Jordan Miles.

Morris ‘put his heart into it’

The late Claude Andrew Morris Sr., a 91-year-old World War II veteran who died Thursday — is being remembered as a strong leader who cared very much for the students while serving on the Buckingham County School Board.

Funeral services for Morris, who was born Jan. 27, 1926, were held Sunday at Concord Baptist Church in Buckingham.

Morris grew up and was raised during The Great Depression in southern Buckingham County, and would eventually become a farmer and a custom home builder, serve for 28 years on the Buckingham school board, work at Craddock-Terry in Dillwyn, get married and have four children — all, pretty much, at the same time.

Morris was wounded as he fought in World War II — an incident that went unreported so he wouldn’t worry his parents back at home in Buckingham as he operated large guns on the front lines in Europe, fighting Adolf Hitler’s forces.

“Claude was always a man concerned with the kids,” said Shelton Foster, who served alongside Morris for many years on the school board. Foster would serve 40 years on the board, many of which he served as chairman.

“If anything was going to be done he wanted to know how it affected the kids. The kids were first in his book,” Foster said.

Foster said Morris loved serving on the board. “He put his heart into it and he did a good job as far as I saw. I enjoyed working with him. He always had a little tale to tell about the way things go and so forth.”

Foster said Morris was “a strong leader. He led the board well.”

He said Morris was “always straight up front with everything. There were no secrets as far as Claude was concerned. Everything was straightforward.”

“I was drafted,” Morris said in a 2014 interview when asked how he got into the army. “I got caught in the draft when they said they were going to draft 18-year-olds.”

“Nope,” he said when asked if he was afraid of going into war. “I wasn’t even a PFC (Private First Class) at that time … I heard on the radio that the president had signed a bill saying 18 year olds (were going) overseas. That was the change in orders,” he shared.

Morris would be stationed in France, Germany, Belgium and Holland.

“I went in battle in Nancy, France … I was in battle all the time I was overseas … It was front-line service. The Germans are over here, and you’re over here, you’re facing them.”

“Well, yes, but not reported,” he responded when asked if he was wounded in the war. “I was hit by … white phosphorous. It hit me and burned. Basically, this arm,” he said as he raised his thin arm into the air, pointing to where he had been hurt with this other hand.

Parts of fighting on the front lines scared Morris, he confessed.

“Oh yeah. You get scared if something goes hitting around you. Yeah.”

When asked if he witnessed any of his fellow servicemen perish, he paused for a moment, looking across the table.

“Well, it was war,” he sternly responded.

The highest rank that Morris would attain would be T-4, or Buck Sergeant. He received two battle stars for his fighting in northern France and central Germany, which included the Battle of the Bulge, where he fought Axis powers.

Morris served during his time in the service as an artillery gunner, or cannoneer. “That’s (the man) in charge of the gun and handling the crew. And firing the gun,” he explained.

In the early 1950s, Morris would meet his lifelong companion, Shirley Carwile, whom he would marry in 1952 after dating for about one year.

The first time he was asked to serve on the county’s board, he turned it down. “I was starting (at) the Dillwyn Shoe Factory for Craddock and Terry (running the stitching room) at that time. I had taken that job,” he explained, noting that he was also running a small independent construction company at the time, and had his wife and four kids at home.

But, as Morris thought more about it, he changed his mind.

“We were appointed at that time (in 1966). Before I left, you were voted on,” he noted, explaining how the process changed from being appointed to the board to being elected by the voters.

Only two years after being named to the board, he was elected chairman.

During the late 1960s, Morris, along with Division Superintendent Mercer Kay, would oversee the full integration of African Americans into the white schools.

When asked what brought him happiness in life, he noted, “I’d rather had more time to fish.” He chuckled at his response.

“The preacher says that working makes me happy,” Morris said in 2014.